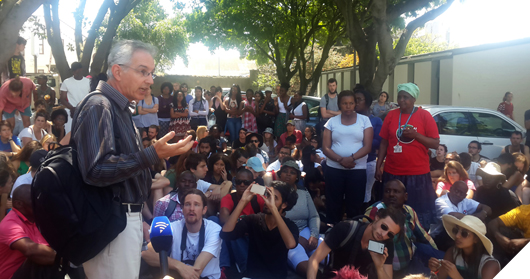 UCT Vice-Chancellor, Max Price addresses students and workers at the GSB during Fees Must Fall protests last year. Photograph by Jan Cronje.
South African universities are being challenged to re-examine their business models and explore how they could do things differently in response to the rising tide of discontent on campuses around the country. There are lessons to be learnt here for others in the business world.

South Africa is on the brink of a social movement for transformation in higher education. The 2016 academic year began with protest action, vandalism and massive disruption of registration at various campuses across the country. In some instances, registration had to be halted and universities were temporarily shut down.

In a continuation of the ‘Fees Must Falls’ campaign, students were protesting against paying registration fees – upfront payments ranging from about R3 000 to R20 000 – depending on the university. Students were also demanding that outsourcing be scrapped. This controversial policy allows universities to contract workers through private companies instead of employing them directly.

In the case of the University of the Witwatersrand (Wits), outsourcing of cleaners, gardeners and maintenance workers in 2000 resulted in the retrenchment of 613 workers, with less than 50% re-employed by the private companies. Wages fell significantly and workers no longer had benefits like medical aid and pensions. The workers also no longer qualified for subsidised education for their children at the university.

Following weeks of protests by students, Wits and UNISA in January 2016 announced that they would scrap outsourcing and begin employing workers directly again. While a victory for students and workers, the process has been costly both financially and in terms of the disruption of academic services.

According to Higher Education and Training Minister Blade Nzimande, the university fees protests have cost universities R150 million since it began in 2015. Unisa and Wits have obtained court orders against protesting students and have increased security on campuses.

What is happening is that universities are finding themselves being pushed into changing their business models, in some instances, scrapping policies and rethinking revenue streams in a manner that should have been done years ago. They are rethinking how they are structured and what service they are providing and are being forced to examine the value of their offering.

In South Africa, other organisations and companies are finding themselves in a similar boat. With the bleak economic outlook, an escalating drought and weak currency, many businesses are taking strain – and in some instances are facing uncertain futures.

It is in this unstable economic landscape that a business model innovation mindset helps to promote innovative thinking and creative approaches to sticky problems. The essence of business model innovation is to rethink the engrained style of the organising practices, value creating mechanisms and value production in an organisation in order to create new styles to evolve to when the timing is most optimal. Professor Roger Martin, author and former Dean of the Rotman School of Management, says the process is not about simply evaluating options and avoiding the worst ones and choosing the least-worst options. It is about creating brand new options; novel customised structures that work for a particular organisation, institution or business.

In a world constrained by the resources of one planet, monetary instability, growing inequality and low-growth, expedient choice among existing options simply won’t do the trick. We need more if we are to create medium- to long-term sustainable value.

Business model innovation prompts CEOs and managers to ask what value they are delivering to their customers; if their customers’ needs are changing and how more value can be given to clients. It essentially helps executive to change the game and provides insight in how business leaders can turn the tables.

In their book Business Model Generation, authors Alexander Osterwalder and Yves Pigneur explore the power of asking “what if” questions. This is illustrated by the example of furniture giant IKEA, which, in 1960 asked, “What if customers bought furniture in components in a box and assembled it themselves?” The idea was unheard of at the time, but has become common practice in the industry over time.

Another “what if” example given by the authors is telecommunications app Skype, which provides free voice calls worldwide and is believed to have earned $2 billion in 2013. Not bad for a ‘free’ service. But many people don’t realise that Skype’s business model makes room for monthly subscriptions and Skype credit, which is used to make calls and send text messages to non-Skype members. This is where Skype is making its money.

Such innovative thinking in terms of providing value and generating revenue is, without a doubt, the way of the future. South African universities are having their own “what if” moments, like asking, what if they scrapped student fee increases? What if they dumped outsourcing? What if they were able to provide free higher education for disadvantaged students in South Africa?

A few years ago, it would have been unheard of for the University of Stellenbosch (US) to drop Afrikaans as language of teaching. But this is what happened towards the end of 2015, following the Open Stellenbosch campaign, which exposed the level of racism and intolerance on campus.

Racism and inequality have become hot topics in South Africa. The Penny Sparrow tweet, coupled with several high-profile cases involving alleged hate speech and outcries over social media have revealed a deeply divided South African society. In addition to the economic strain, there is now also a bigger spotlight on transformation, affirmative action and how representative companies are being.

No company executive, business leader or department head can afford to be blind to the discontent that can be felt in various instances of the South African social landscape – be it among farmers in rural South Africa, on campuses around the country, in unions like Nehawu and Cosatu, between political parties gearing up for local elections or ordinary citizens of South Africa venting on social media.

Leon Schreiber, a research specialist in innovations for successful societies at Princeton University, recently wrote in the Mail & Guardian that South African society has not been this saturated with anger and protest since the late 1980s. He said over the past year, there has been a shift in the country’s political consciousness, motivated by a population frustrated by inequality, poverty and growing unemployment.

There is no business in South Africa that can afford to ignore this – whether it is a family-run bakery in the suburbs or a university offering higher learning to disadvantaged students. Business models must be flexible and able to change. It quite simply is a matter of adapt – or die.