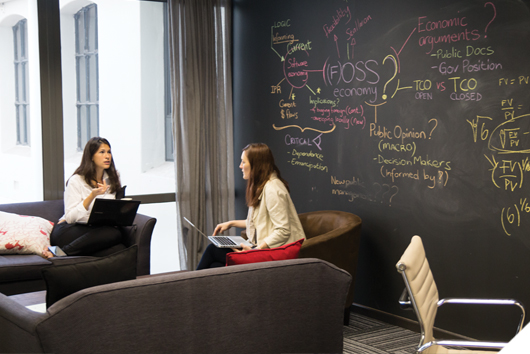 A meeting at the MTN Solution Space, an innovation and entrepreneurship hub on the GSB campus that embodies a new approach to business learning.
As South Africa’s economic challenges intensify, criticism has been levelled at the apparent failure of business schools to produce better business leaders. What should they be doing differently?

A new survey from the Graduate Management Admissions Council (GMAC) has found that MBAs and other business degrees continue to be in high demand in the marketplace. In fact, 96% of employers polled in the January 2016 survey said that said that hiring business school graduates creates value for their companies. But at the same time, criticism has been laid at the door of the MBA for not meeting the needs of a changing market.

Closer to home there is a sense, too, that South African business schools have not done enough to provide the management and leadership needed to make South Africa work. After 21 years of democracy, South Africa’s economy is struggling to grow beyond a percentage point or two, the local currency is hovering at around R16 to the US$, and over a quarter of the population is unemployed. The country is failing to meet its three main objectives of macroeconomic policy, and its state-owned enterprises (SOEs) are in a state of virtual collapse. Corruption is seemingly a runaway train.

In this tough economic and political climate we need to question whether business schools should be doing something differently. In the early 1900s, the MBA programme developed by US universities supported rapid industrialisation in that country. The idea behind the Master of Business Administration (MBA) was to increase efficiency and smooth the production cycle. Now, as one alumnus of the GSB recently put to me, “to be an ‘administrator’ has lost its allure. No one wants to be an administrator.”

Prominent voices have entered the debate over the years. McGill University professor Henry Mintzberg famously said more than a decade ago that MBA programmes were labouring under irrelevant curricula, and Harvard Business School scholars Srikant M. Datar, David A. Garvin and Patrick G. Cullen published their book Rethinking the M.B.A.: Business Education at a Crossroads after the global financial crisis. “Post-crisis, executives and deans identified a number of gaps in MBA teaching, largely in applied areas,” the authors wrote. Among other areas, these included risk management, internal governance, the behaviour of complex systems, business-government relations, and socially responsible leadership. Importantly, the authors noted a distinct lack of introspection and a heavy concentration of greed. Students, they write, are typically overconfident of their own abilities. “If astute financial management is to occur outside the classroom, better self-knowledge is critical.”

This is ironic, because one of the chief critiques levelled at MBAs today is that the pendulum has swung too far in the opposite direction and they concentrate over much on leadership and personal development and too little on the nitty-gritty of administration. But, in the aftermath of the global financial crisis – and in the context of an emerging market in particular – this is a very necessary addition to the educational menu. Much of the contemporary thinking following the collapse of Enron and the economic meltdown of 2008 has required a more abstract analysis and – dare one say it – a philosophical turn of mind to explore its origins. These crises were not merely financial in origin; many of the initial wrong turns were ethical, or could have been averted by more accurate self-assessment. Similarly, the economic and political challenges facing South Africa (and the broader continent) cannot be solved by skills alone; these will need to be applied empathetically, introspectively and innovatively. It is precisely for this reason that the GSB has turned its focus to values-based leadership and social innovation and entrepreneurship to complement its more traditional focus on business fundamentals.

Warren Bennis and James O’Toole, writing for the Harvard Business Review, put it thus: “In fact, business is a profession, akin to medicine and the law, and business schools are professional schools – or should be. Like other professions, business calls upon the work of many academic disciplines. For medicine, those disciplines include biology, chemistry and psychology; for business, they include mathematics, economics, psychology, philosophy and sociology.” Business schools therefore – if they are to evolve – need to call on what we at the GSB call ‘full colour thinking’; a spectrum of analysis that covers leadership and management responsibility from all angles.

We all agree that a key purposes of an MBA – or indeed any business qualification – is to learn to run companies effectively, but this on its own is no longer sufficient. The world has become much more volatile, and (information) technology has disrupted it seriously. Where the classical management models were constructed in an economy that was slowly but steadily growing, but all in all rather stable and mature, this is no longer the case. Managing the sweet shop in those days was good enough. The equation was simple: the better you managed it, the better the results you would get. Today, in most countries in the world, we live in complex societies – highly dynamic and non-linear – where we are confronted with high degrees of uncertainty, be it cultural, economic or political. Poverty and inequality is also a reality for many. In such economies, it is not enough just to administer companies. We need more.

What created the crisis of Enron, or the financial crisis of 2009, or even the current scandal of VW is not a lack of procedures, or capacity to manage those. Rather, these crises are the consequence of a too-strong focus on procedure, which allows managers to hide behind them. The one missing link in most, if not all these crises, is accountability and respect. The best procedures in the world, with a lack of responsibility or accountability, will lead to misuse, and indeed corruption – an issue faced by both the public and private sector to varying degrees.

Steve Denning writes for Forbes.com, “Business schools suffer from the syndrome of their own success. At the bottom of their heart they don’t see the need to change what they believe is a winning model.” He adds that “[b]usiness schools should be equipping graduates to be leaders of the 21st century organisation that operates in a complex environment, where innovation and responsiveness to customers and society are key.” A “radical cross-disciplinary thinking” is required, he believes. “Forward-looking business schools,” he says, “should join together in generating textbooks and courses that reflect an updated view of management … The ranking of business schools by the Financial Times and others should include a criterion that reflects practical relevance, vitality and impact.”

We absolutely require the skills to administer, and in South Africa we have to increase the number of people in the country that have those skills – that is a topic for another day. But alongside that, we need the knowledge and wisdom to administer with a purpose, being accountable, contributing to a better world for our children and grandchildren. As Pravin Gordhan said in his recent budget speech; effective leadership is essential to progress. In this sense, a business school is much more than just an MBA school. Do we want to leave our world merely well administered, or do we want to leave it in overall good health?