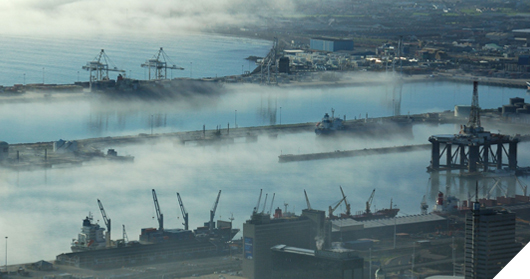 Cape Town harbour in the mist. 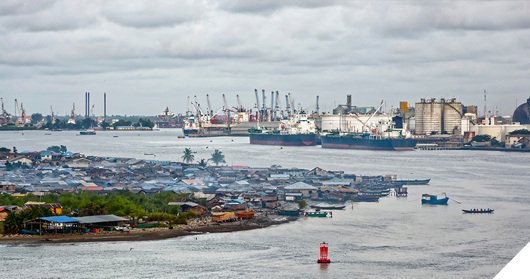 A harbour in Lagos, Nigeria.
Africapitalism, a new economic philosophy that seeks to harness private sector entrepreneurship and investment to create social wealth and address structural inequalities in the economy, is making itself felt in Africa – and analysts believe it has the potential to help the continent reinvent itself, turning from perpetual basket case to self reliance and prosperity.
Helping Africa to emerge is a thriving industry. In a 2015 paper in the Africa Journal of Management, Kenneth Amaeshi and Uwafiokun Idemudia point out that improving Africa’s socio-economic status has remained big business for multinational institutions, foreign governments, aid agencies, inter-national NGOs and international donors alike for many decades.

“Regrettably, some of these actors have also proven to be Africa’s Achilles’ heel. The latest to arrive among this array of helpers are multinational corporations, which often (are forced to) take on public responsibilities in the form of corporate social responsibility. Predictably, none of these has become the panacea to the many challenges confronting the continent rather, most of them continue to flounder at the margins,” say Amaeshi and Idemudia.

Responding to this challenge, there have been greater calls in recent years for better collaboration and partnership among the state, business and civil society on the continent, if developmental challenges in the region are to be addressed. The “Africa should come up with home-grown solutions to realise its full potential” mantra has come to dominate the discourse on African development.

Thus, a new notion called Africapitalism, which seeks to harness private sector entrepreneurship and investment to create social wealth and deal with the structural problems at the local level, is being hailed as a viable way to improve the fortunes of the continent and drive growth that is inclusive.

Proponents of the concept suggest that private sector development, rather than charity or aid is the fastest, most effective and most sustainable path toward self-reliance and prosperity for Africa.

The term Africapitalism was coined by Tony Elumelu, a Nigerian billionaire and banker who founded the United Bank for Africa.

He has described the concept as “the philosophy that the African private sector has the power to transform the continent through long-term investments, creating both economic prosperity and social wealth”.

“Africapitalism believes in the inherent ingenuity, commitment to hard work and desire for self-sufficiency of Africans. It is an economic philosophy that also believes that the African private sector, in cooperation with governments, development institutions, civil society and others, will be the most important source of rising and expanding prosperity in Africa,” wrote Elumelu in an article published last year by Time Magazine.

The Tony Elumelu Foundation has argued that conventional development and business approaches to leveraging Africa’s resources have focused on wealth extraction and often leave local economies in a state of chronic dependency, with little wealth and few resources with which to address challenges at the local level.

For instance, after 50 years of pumping out billions of dollars of crude oil and natural gas, there is still no indigenous Nigerian oil major. And while Nigeria exports crude, it imports refined petroleum for domestic consumption. All of the value creation in the production chain takes place outside the country, and imported refined products are so expensive they require government subsidies to be affordable.

Africapitalism by its nature aims to change such status quos and beneficiation is to a large degree at the heart of the concept.

Its commonly know as the ‘resource curse’. Governments have become preoccupied with extracting raw materials from the land instead of developing a productive population. This, analysts believe, keeps Africa out of the global manufacturing chains that invariably thrust developing countries into the ranks of the rich.

“We export cheap and import dear. Our resources are sold at prices we cannot influence and then the value-adding process happens elsewhere and we end up importing these processed goods,” says UCT Graduate School of Business (GSB) professor, John Luiz, who specialises in international business strategy and the economics of emerging markets.

He says Africa cannot keep relying on its natural resources as this leaves the continent vulnerable to the whims of pricing cycles, and is of the opinion that the continent needs to transition from its reliance on commodities, diversify and specialise. Further, Luiz says, Africa should innovate and most importantly invest more in its people in order to reach its full potential. Investing in human capital is something that proponents of Africapitalism frequently espouse.

Amaeshi and Idemudia state that Africapitalism is capitalism by Africa-oriented entrepreneurs for Africa. It allows for a space to re-appropriate the discourse of capitalism in a manner that puts Africa, its culture and its people front and centre of any possibility of capitalist development in the region. They believe that for Africapitalism to succeed, it needs to permeate the entrepreneurial mindset and boardrooms. Given its normative base, they argue, it also needs supporting governance mechanisms to attain this. Africapitalism requires Africa-consciousness, a form of re-imagined Afrocentricism, which places the interests of Africa and Africans at the epicentre of business decisions.

“Africapitalism offers an opportunity to be inclusive, to take business and development to places that have normally been left outside of the formal,” says Nceku Nyathi, a senior lecturer at the GSB Allan Gray Centre for Values-Based Leadership.

He says Africapitalism is a rallying call for Africans to be more proactive and drive the growth of the continent. Nyathi agrees with Luiz that part of the reason why Africa’s growth has failed to kick in and has not been inclusive is because the continent is still reliant on the old colonial economic arrangements of exporting its raw materials wholesale.

“One solution to that is a rethinking and breaking the status quo … we must add value to products, we must trade more with each other – this requires that the basics are in place though – infrastructure, power, public services and less corruption which, in turn, will enable other things to grow.”

Pointing to the recent biennial African Academy of Management conference in Kenya, a major gathering on the continent where Africapitalism took centre stage, Nyathi says that the academe is now paying more attention to the role of management and organisations in the development of the continent. The conference brings together global policymakers, academics and management to provide key insights on the socio-economic challenges that hamper the continent’s growth.

Nyathi says at the heart of the discussions at the conference was the need for organisations not to just think about profits, but about building communities and reducing poverty – something which a lot of the continent’s organisations, but not all, are already doing.

Intra-African trade has also been seen as one way of improving Africa’s fortunes. Nyathi says one example that came up during the conference was Kenya’s recent decision to buy its sugar from Uganda, which saved the country a lot of money and at the same time benefited Uganda’s sugar industry. Kenya used to purchase most of its sugar from Brazil.

The conference also touched on other initiatives that could boost Africa’s growth, including, education, innovation, skills and management training, especially amongst the youth.

Attendees also discussed some of the hurdles that Africa faces, for example political instability in some parts of the continent, lack of capital and poor infrastructure. Nyathi says the academe needs to engage more with governments and other stakeholders to tackle some of these barriers to Africa’s growth.

“Africa must first think of its people and the gains that will transform the lives of so many. I’m sure a successful Africa benefits the world with less trying to run away from (the continent), the wars, the healthcare access and issues due to instability and lack of development. Africa should not forever be the junior player/partner but could also begin to lead and contribute to humanity,” Nyathi says.

Commenting on the recent migrant crisis in Europe, which was sparked by the Syrian war, Elumelu said the only lasting solution to reduce the economic motivation of migrants is to focus on creating opportunities for Africans at home by empowering local entrepreneurs and businesses to thrive and spread prosperity.

Poverty, political instability and civil war are all powerful ‘push factors’ for migration. For instance, a large number of migrants are from the far northern region of Nigeria where the terrorist group Boko Haram has been waging a bloody insurgency. But migrants from African countries like Eritrea – another large source – cite economic issues, forced conscription and a repressive government as their reasons for leaving. Other migrants are fleeing from the Gambia and Senegal, countries that do not have active conflicts, which means Europe will likely continue to grapple with a flood of illegal migrants, even after the Syrian conflict subsides.

Elumelu said employed in the right way, Africapitalism as a policy can address some of these challenges.

Nyathi says South Africa, as the continent’s most advanced economy, has an opportunity to demonstrate the benefits of Africapitalism by showing exemplary values-driven leadership that leads to inclusion and beneficiation of formerly disadvantaged communities gaining from business participation through a shift in mindset.

“Business will benefit from developing new customers and nurturing better trustful relations with communities that it operates in. Existing businesses need to play an active role and newly created BEE enterprises can’t just follow old models and must carry with them a better attuned business mindset that is aware of the need to create social wealth,” says Nyathi, adding that the ultimate goal of Africapitalism is meeting the challenges Africa faces and improving the lives of the majority, bringing effective leadership and running organisations that deliver for the stakeholders and their social missions.

“Africa is tired of emerging,” he says. “It’s time for the continent to write itself a new story.”