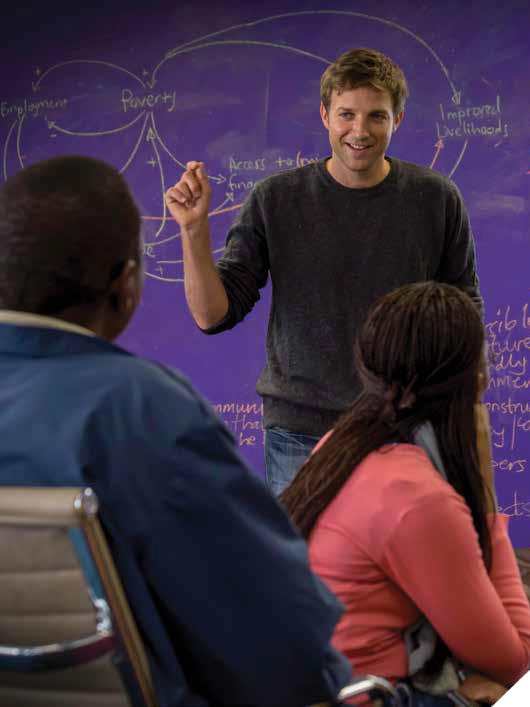 Academics have a privileged place in society and, as such, can play a powerful role in shaping its direction for the better.

Academia is often criticised of being too naïve about the realities of life beyond the ivory tower – far removed from the needs of society. The Economist magazine once described America’s Ivy League universities as “not so much ‘palaces of learning’ as bastions of privilege and hypocrisy”. But more and more academics are rolling up their sleeves to get involved in the mission of finding practical solutions to some of the pressing challenges in society.

In 1970, the late Norman Borlaug was awarded the Nobel Prize for his contribution to the world food supply. The American biologist was instrumental in setting in motion the socalled ‘green revolution’ by creating highyield, disease-resistant crops that helped millions escape starvation.

Despite subsequent criticism of his work, mostly from environmentalists, many academics today look at Borlaug’s work as an archetypal example of how scholars can make an impact on society. He showed on a grand scale that academics do have a role to play in shifting the direction of society.

“As an academic, I think there is a sense of responsibility to interact and communicate not only with fellow scholars, but with a broader community,” says UCT GSB professor Ralph Hamann. Hamann is one of many academics and staff members at the institution who has embraced the idea of pursuing scholarly work in tandem with activism.

Academics pursuing activism with the aim of bringing about social change are influential in many ways and their significance goes beyond the lecture room, where they provide academic guidance and more to many students. They are perhaps a key element in a modern society. Their views and involvement in societal issues can carry enormous weight and in many instances help to positively shape the future – either by challenging the status quo or by finding ingenious solutions to societal and business needs.

“There is a spectrum of work that academics are engaged in that will have practical relevance,” Hamann says.

“There are sometimes these clichés of ivory towers … I think it is possible for some researchers to be quite aloof or separated from practical issues or policy issues. Even so, if they develop good theory, then that can have a significant practical impact.”

The work of the Massachusetts Institute of Technology (MIT) Media Lab is a case in point. Situated in the heart of MIT’s campus, in Massachusetts, the Media Lab is one of the world’s leaders of invention – promoting a unique, anti-disciplinary culture to develop disruptive technologies that could have everyday uses for millions of people. Some of the Media Labs’ successes include the development of the Aspen Movie Map, which was the precursor to the ideas in Google Street View, and Netra, a $2 add-on smartphone device that automatically tests for an eyeglass prescription.

The key to the MIT Media Lab experiment lies in their stated aim “to look beyond the obvious” and to ask the “not yet asked questions whose answers could radically improve the way people live, learn, express themselves, work and play”. Whether working in the technology space, as MIT does, or by innovating policy, processes and business models as the UCT GSB does, looking beyond the obvious and asking the unasked questions is central to the academic activist mindset.

Professor Hamann himself has been asking just such questions aimed at making a difference to business in South Africa as academic director of the Network for Business Sustainability (NBS). The organisation, which is affiliated to the Canadian NBS established in 2005, was set up with the aim of connecting researchers and professionals across the globe who are interested in corporate social responsibility. It essentially aims to address business sustainability issues within the South African context by better using and building the considerable business and academic resources in the region. Companies involved in the NBS Leadership Council include Santam, Transnet and Woolworths, and Hamann says that although the South African NBS has only been operating for just over a year, he believes it has already started to make a difference.

“We have many stories of impact, where people tell us how they have used some of our material. Companies have told us that NBS has influenced the way they think about strategy,” says Hamann.

Very few people would argue that the challenges faced by companies nowadays are varied and indeed intricate. From considering the environmental and societal impact to health, safety and labour relations, the risk implications for businesses operating in the modern world have never been so perceptible. Business needs top notch and relevant advice to help get through the multifaceted socioeconomic milieu in which it operates.

“NBS is an example of an organisation that tries to close the gap between research and practice,” Hamann points out. He emphasises that the relationship between business and academic researchers is at times difficult, adding that some practitioners had actually written off academics, as they did not “understand their language”. The NBS is working to bridge the divide between practitioners and researchers to offer practical solutions for businesses.

While Hamann acknowledges that time constraints and career incentives can make it difficult for an academic to pursue activism or related activities, he believes that academics still can find effective and smart ways of making a positive impact on society.

“The trick is to find those activist activities that contribute to the scholarly theoretical work and vice versa.” He adds that it is interesting to think of the UCT GSB as a collection of activist scholars because there is a stereotype, especially amongst academics and activists, that business schools are essentially handmaidens to business, capital, bosses and management. However, such stereotypes are partly diminishing, Hamann notes.

He says that on the contrary, the UCT GSB offers an environment that fosters activism among staff, faculty and students alike. The school actively encourages its academics to “challenge taken for granted assumptions” and to go beyond case studies and grapple with real problems. The most tangible manifestation of this has been the launch of the Solution Space at the beginning of 2014. Partly modelled on the interdisciplinarity of the MIT Media Lab concept, the space offers a physical home for the school’s innovation programmes and initiatives and seeks to connect people in the innovation ecosystem (academics, practitioners, policymakers, entrepreneurs, investors and so on), allowing them to work together to invent and test new business models, products and services, and incubate businesses aligned to African markets.

But can it work? In a 2013 research article on academia and activism, Michael Flood, Brian Martin and Tanja Dreher of the University of Wollongong, Australia, suggest that academia and activism are simply different things. Every activity has a bottom line. In politics, it’s votes. In business, it’s money. In religion, it’s souls. Activism is about promoting social change, which is a different bottom line to that of academia, which is knowledge generation. However, the three writers argue that many academics engaged in social change work experience powerful personal and professional benefits. Activist academics can find meaning and comfort in the sense that their work contributes to the greater good, nourishing a sense of personal and collective purpose. UCT GSB lecturer, Dr Nosakhere Griffin-EL, is one such academic.

“In my life, I have always combined dreaming and acting, what I call dreamocratic action,” says Dr Griffin-EL. “I see this as a calling and believe I was placed on this earth to live a purpose-driven life. Honouring that purpose means I had to find out what I love doing and understand how it can assist in the development of a better world. My purpose in life is to assist individuals in articulating their dreams, while providing them with the support to pursue those dreams within a real-world context.”

Dr Griffin-EL teaches and mentors students through the Solution Space, and conducts research to understand how to make the world more inclusive through what he calls “the pedagogy of dreaming”.

“The Solution Space is a place where dreams meet courageous action,” he says. Experienced and aspiring entrepreneurs enter the space with innovative ideas and transform those ideas into inclusive businesses that create economic and social value. But it is not about creating businesses for the sake of creating businesses. For real value to emerge, Griffin-EL cautions that entrepreneurs must innovate with members of the socially and economically oppressed, not for them. Solutions must be embedded within a context.

“Disembedded innovations have the aspiration of meeting people’s unmet needs, but without a grounding in a specific social reality, the innovation will never have the intended impact,” he says. To achieve real impact, entrepreneurs must engage in dialogue with community members, and develop innovations grounded within that experience.

“The Solution Space experiment is too young to judge its impact. However, five years from now, our success will be judged on whether we have managed to create inclusive businesses that are both profitable and socially relevant,” he says.

Whether it works or not, he believes that, as an academic, the important thing is to try. “The work of academics has to go beyond publishing, it has to create the possibility for a better future.” For Griffin-EL, that future is “an Africa free of the contradictions that prevent its citizens from reimagining themselves and their societies as transformable through their concrete action”, but the field is wide open. The needs are great, the invitation to get involved is broad and the possibilities, in theory, endless.