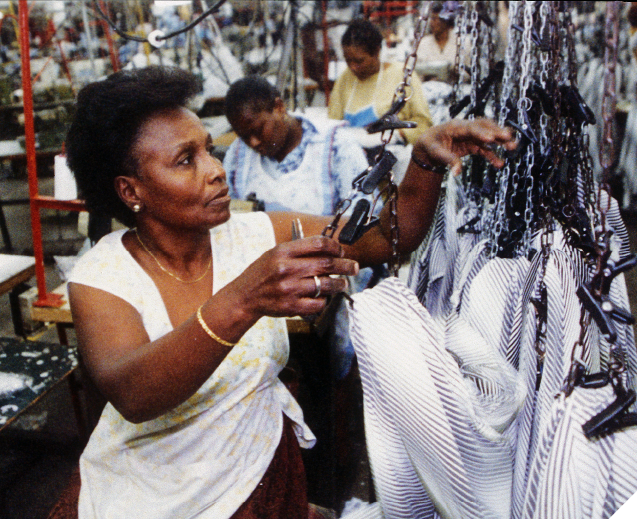 With so many gloomy stories in South Africa currently, it’s easy to overlook one of the more encouraging success stories: the clothing and textile industry.

Earlier in 2017, Minister in the Presidency for Planning, Monitoring and Evaluation, Jeff Radebe, highlighted the textile and clothing industry as one of the sectors where the economy could most effectively be bolstered.

This is something of a miraculous turnaround, particularly in the face of investment downgrades and economic and socio-political instability. The clothing and textile industry was one of the hardest hit by globalisation and increased competition following the opening of South Africa’s borders to global markets post 1994. Facing high import duties and the skyrocketing of illegal imports and cheap textiles from China, Pakistan and elsewhere, coupled with insufficient investment, the industry went into decline.

Fortunately, a number of conscious interventions were implemented that have helped to turn things around.

In the Western Cape, government and industry jointly established the Cape Clothing Textile Cluster (CCTC) in 2005, a not-for-profit initiative that believed that struggling participants in the sector needed to pool resources and collaborate as a cluster in order to counter the effects of globalisation. Embedded in the CCTC’s approach was the concept of lean thinking – a business methodology that, simply put, aims to continuously offer more value to customers with fewer resources. It does this by foregrounding respect for people while providing organisations with a new way to think about how they organise processes and slowly eliminate the things that are not adding value.

A few years later, the Department of Trade and Industry developed a nation-wide Clothing and Textile Competitiveness Programme (CTCP) whose broader objective is “to assist the industry in upgrading processes, products and people to re-position it so as to compete effectively against other low cost producing countries”. The initiative provides financial assistance to organisations as well as training in best operating practices including lean manufacturing and thinking.

Fast forward a few years, and by 2013, textiles and clothing accounted for about 14% of manufacturing employment and represented South Africa’s second largest source of tax revenue. The textiles, clothing and footwear industry was – according to the Industrial Development Corporation – becoming the most cost-effective way of creating jobs. In fact, that year’s Source Africa Conference brought to light that the CTCP had created some 12,000 jobs and assisted more than 400 companies.

According to Ebrahim Patel, local manufacturing industry sales in clothing, textiles, footwear and leather increased from about R41.8 billion in 2010 to over R50 billion in 2015; an increase of 21% over five years. By contrast, they decreased by 6% in the former five years from 2005 to 2010.

One company that exemplifies the turnaround is K-Way, a leading outdoor apparel brand. Part of the Cape Union Mart Group, K-Way’s dramatic about-turn over the past 12 years is the subject of a recent award-winning case study, “The Evolution of Lean Thinking at K-Way”, from the UCT Graduate School of Business adapted from a thesis by MBA student Himanshu Vidhani.

In 2004, K-Way was operating at a loss and on the verge of shutting down. General Manager Bobby Fairlamb was hired and given the task of turning the business around in two years – a tall order by any standard. He embraced the challenges head-on and the ensuing story makes for gripping reading.

K-Way benefited from the collaboration and support provided by both the CCTC and the CTCP. The latter provided funding and training in lean thinking that enabled K-Way to buy the best machinery available and double the scale of its production while also improving quality. Later the organisation also benefited from an injection of enthusiasm and expertise from lean thinking consultant Herlecia Stevens.

Fairlamb and his team, notably Beverley Williams, who became the Production Manager in 2009, started by using lean principles to identify and implement changes to achieve better results in the factory – notably improving production efficiency and on time delivery. After some initial success there they turned their attention to the much more difficult task of shifting organisational culture.

They engaged deeply with the mostly unseen, or what lean thinking calls “under the water” elements, like leadership, employee behaviour and engagement. People started to become more engaged in their work and supervisors saw an increased ownership of the process. Absenteeism fell along with rework and reject rates. Fairlamb attributed all this to the morale of the people: “It’s clear to me now – if morale is up – all the KPIs are up. If morale and engagement are down, you are always on the back foot. This is why we could make the eventual strides we did.”

Why is this story important? Because it offers us some insights into how to achieve success in difficult times – and not just in the clothing sector. Looking at what worked, and why, can help other organisations make more informed choices in thinking about how to approach the unique challenges in their industry or context.

The first lesson that the K-Way story surfaces is that at any time – but particularly at this critical juncture in South Africa’s economic history – we absolutely cannot afford waste. Amid cries of corruption and economic decline, we must focus on adding more value to our customers, consumers and enterprises by eliminating waste.

The second – and this is related to the first – is that we need a fundamental shift in thinking that emphasises respectful relationships between people. This is particularly important because without engaged customers and partners, there will be no on-going business relationships. And critically, without the participation and commitment of staff, the elimination of waste will remain a theory only.

According to Professor Norman Faull, founder and director of the Lean Institute Africa, at the core of lean leadership is the necessity of adopting a different way of behaving. It is both a leadership and a management system and it involves learning new behaviours and tools; like how to learn from mistakes and how to embed the actions and processes that an organisation must implement to ensure that it is fit and ready for practice.

It’s hard to put a price, or a number, on this kind of shift in behaviour, but the K-Way case comes close. When Fairlamb joined K-Way, the factory was operating at 40% productivity. This meant that for every clothing item, which should have taken 10 minutes to manufacture, employees at the factory clocked roughly 16 minutes. By 2012, K-Way was operating at 75% production efficiency. By 2015, it was charting an efficiency of 120%, as employees took eight minutes or less to make the same garment.

South Africa is facing turbulent times, of that there is no doubt, but the K-Way story shows us that a slow but sure journey towards eliminating waste, creating greater respect for people and continuously engaging how to do both these things better – as well as wise collaboration within the industry and with government, it is possible to turn things around, one KPI at a time.