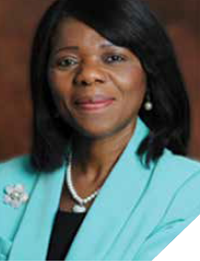 Human rights activist and advocate Thuli Madonsela has more to offer South Africans than her hardline stance on government corruption – she embodies a leadership quality that others would do well to emulate.

“Thuli Madonsela is very centred. Her leadership style is non-reactive and very clearly on point. She signals her intention and she holds her presence. This gives her enormous integrity and adds credibility and moral authority to her professional presence,” says Liz de Wet, course convenor of the Women in Leadership programme at the UCT Graduate School of Business.

De Wet says that when Madonsela published the report on Nkandla, she maintained her composure while under severe pressure and won respect from all quarters.

“By being steadfast and not allowing herself to be drawn into derogatory comments about herself, she strengthens her message, instead of weakening it as her detractors may have intended,” notes de Wet.

Madonsela’s strong leadership presence has contributed to her success, professional standing and the impact she has on the political sphere. Helping other women to develop their own signature presence is a cornerstone of the Women in Leadership programme at the UCT GSB.

De Wet says that despite the fact that many studies have shown that greater gender diversity is good for businesses, improving all aspects of company culture and ultimately translating into profits and greater productivity, women are still under-represented at the top tier of business and government.

Each year, for the past seven years, the annual McKinsey Women Matter study has shown that companies with women in senior executive positions perform better than those with no women at the top. Yet in South Africa, Women24 article earlier this year stated that at the top 10 biggest SA companies, only 19% of board members are women, and 30% of senior management are female.

There is a philosophy that diversity gives a more accurate view of reality. The more diverse boards are, the more accurate the perception is of what is going on, the more agile the company is, which, in return, leads to better results,” says de Wet.

She adds that while more women are entering senior leadership, many challenges remain. Women continue to struggle to balance responsibilities at home with the demands of a high-pressure job. But companies are coming to realise that appointing women to senior positions – and being flexible about their working conditions to help them stay there – not only looks good on paper, but is actually good for the company as well.

According to Samantha Crous, Regional Director of the Top Employers Institute: Africa and Benelux, research shows that top employers are increasingly spending more on education and training as well as on employee benefits (such as more child care or crèche facilities and flexible work hours). Of all the companies that took part in the certification programme in 2012, 89% said they offered leadership development programmes, signalling that companies are increasingly becoming aware of the benefits of diversity and upskilling leaders, says Crous.

“There is growing pressure on organisations to be much more innovative, collaborative and responsive,” says Professor Walter Baets, Director of the UCT GSB. He says a lack of inspired leadership and a fear of innovation can have disastrous effects on companies.

De Wet says the broad challenge in the business world is to change the narrow views of leadership that are prevalent. We need to create a much broader spectrum for different kinds of leadership. “The only leverage a leader really has is themself. This is something that Thuli Madonsela demonstrates very strongly. So this is what we are looking at – transforming the self to amplify impact for an individual and an organisation.”