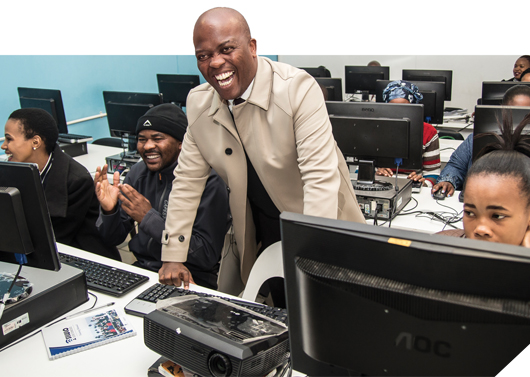 Rani with some of his customers.
Self-proclaimed urban technologist, Luvuyo Rani, GSB alumnus and co-founder of Silulo Ulutho Technologies, a company that aims to inspire and educate marginalised South Africans through technology, is teaching the business world a thing or two about how to build a company from the ground up in a township ecosystem.

Imagine being a student without access to the internet? Impossible, right? Yet for Luvuyo Rani, this was a daily reality. Living in Khayelitsha and studying in Cape Town in the 1990s, he would have to travel for an hour at least to get to a computer just so that he could check his email.

Now this was more than two decades ago. And while it would be nice to believe that things have improved for township communities in the past 20 years, the reality is that too many South Africans still struggle to get online. According to internet live statistics, just over half of South Africans (52%) enjoy the luxury of internet access at home. And the further you are from the centre, the less likely you are to be connected. A 2014 Statistics South Africa report found that just 2% of homes in South Africa’s rural townships had internet access. If you count mobile phones and internet cafés, the numbers trudge upwards to around 20%. This statistic translates into significant problems down the line, since education, the likelihood of employment, and the option of further studies are increasingly becoming tied to an individual’s computer literacy and internet access.

It was these numbers and his personal frustrations that drove Rani, now an award-winning entrepreneur, to take his first step into the world of business. “Before I started the business, I was a teacher. It was back when Outcomes Based Education had just started being introduced. Teachers and students alike started needing access to computers and no one was really providing for that demand,” Rani says.

“We started off by selling second-hand computers to teachers in the townships and eventually opened an internet café in Khayelitsha when we realised that so many people actually didn’t know how to use the technology. Most people we encountered, of course, didn’t have much faith in what we were doing, but we could see that there was a real need and a real opportunity for growth.”

Rani says that they started the internet shops as a way of giving people in underserved areas access to computers. “School learners in particular would make use of the computers and through that we helped the students become computer literate,” he remembers.

Ten years down the line, Rani can claim to have helped more than 25 000 such youngsters. His company, Silulo Ulutho Technology, which he co-founded with brother Lonwabo, has expanded dramatically from a single internet cafés to a R30 million company that offers computer training courses, internet cafés, business centre services and IT retail and repair. And the awards and recognition for these achievements are stacking up on Rani’s shelves. Most recently, he was named the 2016 Schwab Foundation Social Entrepreneur of the Year.

Rani credits much of his success to his involvement over the years with the UCT Graduate School of Business. “In 2006 I was a student at the GSB (the Association Management programme). That course was definitely my break into serious business. I used to tell everyone I met there that I ran a spaza shop, but I was planning to run an empire someday. I also continually based all my business cases that I was doing for the course on my own company.”

The course, according to Rani, shaped his thinking. “I also managed to get a loan of R26 000 through the Centre for Innovation and Entrepreneurship while I was there, allowing me to buy the computers that I was renting at that stage, and take my business to the next level,” Rani continues. The next level involved expanding the internet café into more of a business centre. “We based the whole business at that stage on internet access, education, business services and mobile,” he says. They then bought a bakkie and started to form new connections and partnerships and developed a franchise model to help grow the business and expand beyond the limits of Khayelitsha. It has since spread to 40 centres in the Western and Eastern Cape that together employ more than 180 people. “We are rolling out to Gauteng now as well,” Rani adds. “And we plan to grow the business outside of South Africa’s borders too.”

What makes Silulo’s success even more significant, is the fact that many similar initiatives to bring connectivity to South African townships have been slow to take off. This is true, not just for initiatives like the free WiFi projects in Kayelitsha and Soweto, but also for other products like short-term insurance and other financial services (a study by KPMG reveals that only 15% of South Africa’s total population has short-term insurance).

Rani notes that a sound business plan is only one small part of what it takes to launch any such project in South Africa’s underserved communities. “We are certainly not the first business operation to try and cater for the underserved and rural markets, and I believe that other companies have suffered setbacks because they are not in tune with what these communities need from a business. We have made a success of it so far because we understand the community in which we work,” he explains. “Small communities such as these do not support businesses if they do not have a good understanding of what they do and their motivations. You earn the trust of customers in rural areas if you can easily communicate why you are there, and you can show that your motivations are pure,” Rani says.

Rani uses an interesting case to make his point. “A while ago our business in Khayelitsha was robbed. What struck me about that was the fact that only our office was robbed, and the computers and equipment that are used to serve the customers were left untouched. We have also received a lot of support from the community that we operate in, which I believe is due to the fact that people are actually realising that they can and should depend on the types of service that we provide,” he says.

Rani adds that being able to show results has also been important. “Many of the students that have been trained and helped by Silulo Ulutho Technologies have found employment as a direct result of becoming computer literate. From call centre operators to IT professionals, we can actually show the community how we have helped people that they know. That takes away a lot of the suspicion with which a new business is sometimes viewed,” Rani adds.

As a final point, Rani also notes that this lesson is relevant to companies that are looking for new business in the rest of Africa. “We also envision Silulo Ulutho Technologies venturing into other African countries in the future and I believe that the lessons we take from operating in South Africa’s underserved communities would be valuable to any business that looks to create and tap into new markets on this continent,” concludes Rani.