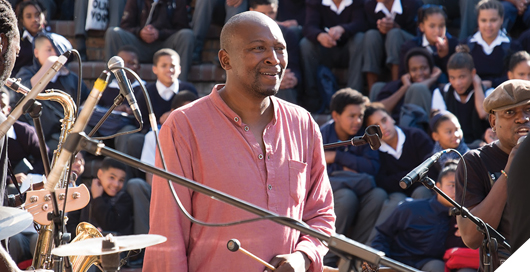 Bongani Sothononda, the man behind the music that marks the 50th anniversary of the GSB, says that if it had been up to his parents, he would never have become a musician.

Sotshononda’s father, who now acknowledges the value of his son’s persistence, could not know that he would grow up to be internationally recognised as a composer, instrumentalist, band leader and arranger. He could not know that music would show his son the world and teach him about people. As a successful music entrepreneur, Sotshononda‘s story strikes a chord with the values and vision of the GSB, which was one of the reasons he was approached to work on the somewhat delicate job of composing a piece of music to mark the school’s 50th anniversary.

“We wanted to create a piece that reflected the GSB’s ethos of a locally rooted business school with global relevance where the first thing you will learn, is to unlearn what you think you know,” says Saskia Hickey, market intelligence and strategy manager at the school and MBA alumnae. “That is not an easy brief!”

But Sotshononda was delighted to rise to the challenge. The primary idea behind the resulting piece, titled New world, new ideas, was one of celebrating unity in difference, he says. “My message was about how, if we work together, we can achieve more; hence the different elements I incorporated into the composition.” He continues that musicians tend to default to comfort zones. “Classical musicians seldom want to work with jazz musicians because the former want everything charted, even their solos,” he laughs. They’re a draw-by-numbers ilk, even their creativity must be contained within structure – staying within the lines when colouring in. Whereas jazz musicians are much more unpredictable – malleable. More likely to toss the colouring-in book altogether and freehand the process instead. And then there are traditional musicians who offer their own idiosyncrasies.

“Add everyone to the mix and some semblance of unity must be found for the music to occur. The theme is inherent in the nature of music.”

Steve Gordon, co-founder of Making Music Productions, who project managed the production of the piece, adds that it’s important to note that the United Nations of Africa Band, which performed the music live at the GSB’s Graduation Dinner in June, wasn’t just assembled as a concept project. “It grew out of an organic process with various people he had worked with over time; immigrants, musicians from across the continent. The band had already evolved in that way. We didn’t have to hunt for it and manufacture it. It wasn’t a kitschy construction.”

The result of bringing this interesting bunch of musicians together is that the composition doesn’t fall under a specific genre. “I can’t box it,” says Sotshononda. “It could be considered African, jazz, or even classical with the incorporation of the violin and the cello. Maybe even the term World Music applies.”

Hickey says that this rather echoes what the GSB itself stands for. “We are more or less re-inventing what it means to be a business school in an emerging market context. We also bring unusual influences, ideas and people together to create something unexpected – in business terms we might say disruptive – in order to create something new,” she says.

The GSB’s growing reputation for turning things on its head is also evident in the foregrounding of the marimba as a solo instrument in this piece. The marimba, a quintessential African instrument, is more commonly thought of as a background or chorus performer, but in this piece the instrument, by contrast, is a unique chromatic instrument and it takes centre stage. This is one of the things that make Sotshononda special as a musician. He codesigned the instrument with a local craftsman based in Grahamstown, Christian Carver.

His decision to move away from a diatonic marimba was informed by business, as much as artistic prerogatives. The artist in him wanted to take the indigenous sounds of the instrument beyond the marimba groups of his youth, and the entrepreneur in him realised that there would be more work opportunities if he stretched the instrument into new territory. He says, “I decided to invest in my own craft and buy the first chromatic marimba. This makes me the only person in the country, as far as I know, playing this instrument. I also get to lead, on the marimba, which is incredibly rare – especially with jazz outfits.”

“There is something magical about upending the perception of the marimba as an African curio shop instrument and, through action, asserting its role to that of a serious musical lead,” comments Hickey.

New world, new ideas was also composed with collaboration, another hallmark of the GSB, in mind. Gordon says, “The music’s copyright acknowledges Bongani’s contribution. Although the assemblage of the project recognises that there could be other voices built into the music.

“Our intent was that sections of the composition be made available to other artists. As an instrumental it may mean that someone may want to MC over it for example. There’s a provision for that aural space; the music has a groove and a melody in its own right as a composition and would work well in terms of a collaboration.” Sotshononda points out that a lot of artists from back in the day were against the idea of more modern musicians sampling their music, especially in other genres of music. They would complain about their work being spoilt. But they should thank Jay-Z, Casper Nyovest and all those House DJs for the royalties they’re earning now. “Some of the music that the older musicians made is now sitting on a shelf, forgotten,” he says. Adding that: “There is a lot that one can do with the piece. I wanted not just a piece, but a template for anyone to be able to take the music and add their own personality to it. It could end up in Australia or anywhere else in the world.”

Hickey says that this dynamic approach is more in keeping with the ethos of the school. “We didn’t want to create a great piece that lived and died in 2016. In the same way that the knowledge and spirit our students acquire while studying at the GSB will be augmented and applied in different ways, we hope that this composition will find an evolving expression and meaning in the world,” she concludes.