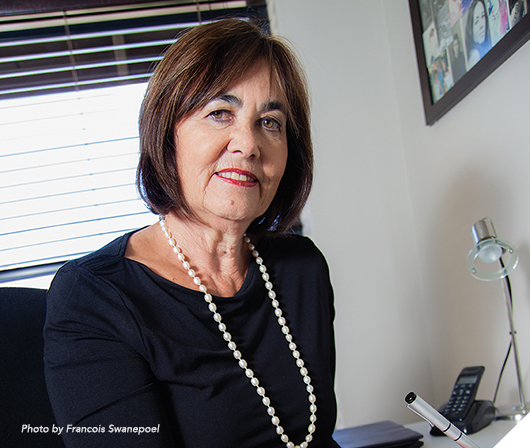 In her 27 years at the UCT GSB, Linda Fasham was more than just the alumni relations manager. She was a mother, confidante, valued support network, trusted friend and living legend to thousands of students who went on to become successful businesspeople and powerful alumni of the school.

There are not many people who can say they have been a part of the UCT Graduate School of Business for almost three decades – having known the school both when it was small and situated in Rondebosch with only MBA students on campus – to the hive of activity it is today, boasting multiple accreditations including a listing on the Financial Times Top 100 business schools in the world.

“I have seen the school go through incredible changes,” says alumni relations legend, Linda Fasham, who retired at the end of last year. “Back then, the students used to come to class in suits and ties, in line with the thinking that you had to dress business-like if you wanted to think business-like. In the early years, there were no black people and very few women. All that has changed and it is wonderful to see that diversity on the campus now.

“Life was easier then, goodness, that makes me sound so old,” she laughs, looking back at the early years. “There was no email, when we sent out a notice it went out in bulk mail. I used to carry these bulk mails in envelopes to the post office!”

In December 2014, Fasham retired as the GSB’s alumni relations manager, a position she held both part-time and full-time for 27 years. News of her retirement shook many alumni, who remember her kind and compassionate support during their years as a student and have come to associate her with the school’s alumni association. They say they cannot imagine the school without her.

“I knew Linda for 15 years when I worked at the GSB and she was outstanding, ethical, humorous and really represented the true soul of the GSB,” said Jon Foster-Pedley, former UCT GSB faculty member and now Dean and Director of Henley Business School, Africa, in a message of tribute.

Emeritus Professor Frank Horwitz, former director of the UCT GSB and Cranfield School of Management, UK, compiled this tribute to her: “In developing its alumni relations, thousands of alumni will remember Linda’s warmth, friendliness and her helpfulness and passionate commitment to ensuring that the close connection between them and the school continues over many decades.

“I recall the 40th year reunion of the MBA class of ’66 and their very special bond and bonhomie that endured over the decades. Linda had so much to do with ensuring that these special relationships and networks were continued. She will be missed and remembered not only by present staff and faculty of the GSB, but by thousands of people who studied and worked at this wonderful institution over the years.”

Linda Fasham came to the business school in 1981. With a background in computer programming and marketing, her first role was in the executive education department. After a year-and-a-half, she left to have her daughter Nicole. She laughingly recalls how former director, Professor Paul Sulcas, then called her to ask her help in setting up the alumni association. She said she told him she would do it only if she could have school holidays off, be involved in her daughter’s life and do lift clubs and school outings. He did not hesitate before replying,“Fine.”

The alumni association initially was a separate entity from the school and had chapters in Cape Town, Johannesburg and Durban with a national committee that met regularly. Over the years, a powerful and dynamic network of more than 23 000 alumni has been built up in over 68 countries and it has been integrated as a department within the Business Development Unit on campus.

At one of the four farewell functions held for her in Somerset West towards the end of 2014, close friend and alumni chairperson, Ian Reid said, “Linda enabled the alumni to become a significant force in the GSB. She has set up a platform on which we depend as a school and an alumni body. It is so effective that we are now the top business school in Africa and one of the top 50 in the world.”

Few people know that Fasham has a serious heart condition that has affected many aspects of her life, which meant that she had to sometimes change her working conditions to look after her health. But in 2001 she came back to the job full-time. “I have always loved the job. I love the people, I love listening to them, talking to them and helping, watching them growing during their studies. It was an easy decision to carry on growing with the alumni association.”

Apart from the personal pleasure she took in looking after the students, there was a professional reason as well. “It is critical for students to have a happy experience at the UCT GSB as when they leave, they become alumni and ambassadors for the school,” she says.

“It has been a very interesting journey, a challenging one, at times very stressful, but really the enjoyment has been what has kept me going,” she says. Highlights have been the class reunions and travel overseas, meeting up with alumni and colleagues. “I get such a thrill out of watching them network, it is amazing just to see them engage with each other and network at a function. To see how they have this common thread, that is the GSB. And they will talk about how the GSB changed their life.”

Fasham has worked with four directors and was part of the recent restructuring of the school, and while she says change is good, she feels history is important too. “You can’t put 27 years of experience into a box and just hand it over to someone else.” Perhaps this is why the GSB has asked her to continue working with the business school part-time, helping to set up the Alumni Challenge Fund, which is part of the GSB endowment, proceeds from which are to be put towards scholarships and world-class faculty procurement. She will also be involved in collating a commemorative book to celebrate the UCT GSB’s half century in 2016.

One of the things she will be looking forward to after her retirement, is no longer having to sit in traffic for hours each day and spending more time with her family … and working part-time for the GSB, of course.