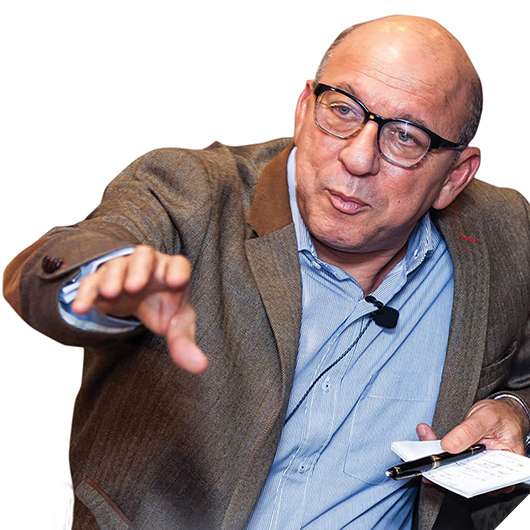 “We have to root out corruption. We can’t have a little bit. It never steals from wealthy people; it always steals from the poor. The fact that people get into public office to feather their own nest is wrong. No corruption should be tolerated in any society.”

In one of his first public appearances since retiring from public office, former finance minister Trevor Manuel told an audience at the UCT Graduate School of Business that South Africans should not assign blame for what is wrong in the country, but should instead try to focus on solving problems.

The biggest challenge for South Africans right now is to solve the problems that are afflicting the country; issues like poverty, inequality, unemployment and the lack of skills says Manuel.

In a rare appearance at the school’s Distinguished Speaker Programme, Manuel told friends and alumni of the school that there is no silver bullet for the country’s problems but that criticising from the sidelines was not the best way to tackle the issues.

Manuel, who was one of the country’s longest-running members of public office with a career that spanned over 20 years in senior positions in government, described the passion and zeal that public officials had during the early days of the new democracy, acknowledging that the same enthusiasm for the job appeared to have waned in the years that followed. He said the anti-apartheid struggle had reared many of the first ANC government officials, exposing them to poverty and suffering. “So the question we focused on every day was whether we could build a democracy that advanced the interests of the poorest of our people. The Constitution provided a framework for this.”

But many of these public servants have since left government and have not been replaced by people of the same calibre, he said. “Parliament perhaps doesn’t carry the same status any longer, so it does not attract people as much. These are issues that we need to talk about.”

Manuel said that business schools have a key role to play in creating a new generation of leaders in business and government with the same passion for fixing some of the country’s problems.

“My main concern for business schools like this is that we don’t do enough to hone policy development skills of people. Mainly, we aren’t generating nearly sufficient numbers of people who understand the policy process.” He also said that there was a strong correlation between administration and policy and that people needed to know how to implement policy – it wasn’t enough to have wonderful documents and plans like the Constitution or the RDP (Reconstruction and Development Programme) or NDP (National Development Plan) if officials were unable to put those into practice.

Manuel has been alternatively lambasted and praised in the media over the years for the country’s economic gains and losses.

“Some tough decisions were left to me and we thought things would work out differently. We thought we could stimulate growth and everything pointed in that direction, but part of what we didn’t understand well enough then was how crises elsewhere in the world would affect us. We lived through the Russian crisis, the Asian crisis and the Brazilian crisis before our own crisis hit us.”

Manuel is currently with Rothschild’s as deputy chairman and senior advisor and still does a lot of community work, especially with the youth in areas like Mitchells Plain. He says that the timing was right to leave public office. “If people stay in whatever they do for too long, they become stale and defensive. In a position like that, the personality and portfolio become conflated. I don’t think the political environment is designed to deal with this. So perhaps I overstayed my welcome in the Ministry of Finance.”

He called for people to become more involved and active in their communities, to become more empowered in bringing about change. “The engine room for development starts with active citizens,” he said, adding that maintaining such initiatives was equally important.

“We are a nation, a generation of people who solved problems of a political order but it’s incomplete for as long as people feel they are not included in the outcome of the democracy.”

He continued, touching on the hot topic of corruption in public service, which many of the questions from the floor alluded to: “We have to root out corruption. We can’t have a little bit. It never steals from wealthy people; it always steals from the poor. The fact that people get into public office to feather their own nest is wrong. No corruption should be tolerated in any society.”

Manuel concluded that he hopes to continue to be of service to South Africans. “Hopefully I’m still in a position to advise and help with problemsolving and to help others find a career in public service, because it is important that we create opportunities for South Africans. We need the brightest and the best to ensure that we can get the streams of ideas that help us to make the right decisions.”