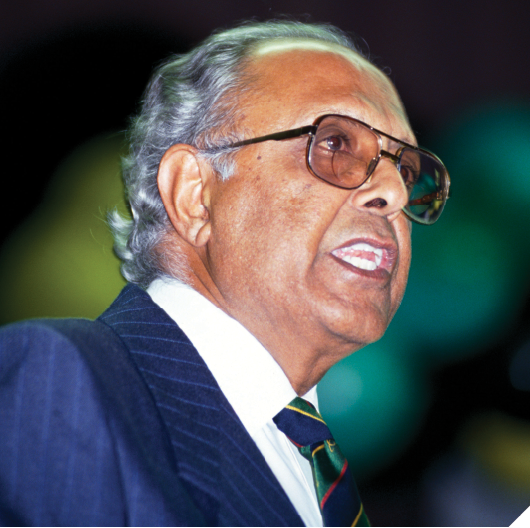 Leaders like Ahmed Kathrada who are defined by their service to others, are deeply mourned upon their passing. Fortunately, there are many men and women in this country ready to step forward to serve society in similar ways – if we can find the right means to support them.

The death of anti-apartheid struggle stalwart Ahmed Kathrada in March sent shock waves throughout the country. It came at a time of political volatility and tension and his loss was felt keenly by many who had drawn courage from him over the years and had hoped for his guidance in these times. Despite his advanced age, he was still very much engaged in the public arena.

In his eulogy at the funeral, former president Kgalema Motlanthe paid tribute to comrade Kathy, as he was affectionately known. “Today is the day on which we close the eyes of comrade Ahmed Kathrada, permanently; because during his lifetime he opened ours forever and saved us from the blindness of the heart. Along with countless men and women of a higher order of consciousness with whom he cast his lot in pursuance of deep ideals, comrade Kathy helped unleash human possibilities,” said Motlanthe.

Respected and revered for his humility and humanity – despite being arrested multiple times and serving 26 years in jail on Robben Island – Ahmed Kathrada personifies the principles of a leadership style that is defined by service to others, contribution to community and a profound insight into the self. It is called steward leadership.

From hero to servant

Steward leadership evolved from the early 20th century concept of a leader as an individual hero into a person with more transformational, visionary, collaborative and resilient qualities. Such individuals are skilfully aware of how to achieve results through the use of soft power (the ability to get others to want the same things that we do responsibly): acts of generosity; respect for other traditions; appeal of cultural, social and moral messages; moral courage; compassionate orientation; attraction and influence; and, acting from deep care and love – as opposed to the unfettered use of hard power (the ability to get others to do what we want): control; power of position; using authority; economic muscle; as well as military threat and might.

Leaders, both in business and civil society, with a stewardship outlook on life are concerned about the challenges represented by climate change, economic inequality, class struggles, gender issues, sustainability as well as financial vulnerability. It is a rare kind of leader who combines a concern for these with a greater organisational ability and expertise to become highly capable, influential and impactful.

A journey towards personal mastery

Stewardship has at its centre the notion of others and the common good, emanating from a deep spiritual orientation or ignited purpose on the part of the individual. For Ahmed Kathrada, this undoubtedly came about in part during his 26 years of imprisonment on Robben Island, or during any one of his many arrests and periods of detention. He was also devoutly religious, having undertaken the Islamic Haj pilgrimage to Mecca in 1992.

But stewardship is not about religion or even about spirituality. First and foremost, it is perhaps about personal psychology and self-awareness. Our research shows that a framework of stewardship may include nine dimensions: personal mastery; personal vision; mentoring; valuing diversity and inclusion; shared vision; risk-taking and experimentation; vulnerability and maturity; raising awareness; and delivering results.

The common thread that runs through all these dimensions is that personal mastery is a journey on which a person is continuously improving their abilities and growing in the quest for a different future reality. It is about learning, unlearning and re-learning, as well as becoming more aware of oneself and conscious of those energies that prioritise one’s choices in moving towards the desired state. It means being willing to let go of negative emotions, of old ways of doing that may be comfortable but are no longer productive – tapping into one’s full potential as a human being; first and foremost becoming the leader of one’s own life. Often steward leaders set out initially to serve (something much larger than the self – a cause, a movement, a calling, a purpose), and end up leading. Leading is rarely their initial goal.

Stewardship advocates being in a position that benefits the community before the individual. It is also about trust. A person who is the master of their abilities, and is gracious enough to be willing to grow others, will inspire trust in others and make stewardship a reality.

Research shows that the ability to get people engaged, and to perform well, depends largely on what they perceive when they look and listen to you. They need to see someone who appears willing to step into unknown possibilities, show courage when adaptability to changes is required, and witness someone who is willing to stand up and carry on after failing. This kind of strength and resilience is acquired through continuous sense-making of one’s own personal narrative, and development of ‘personal gaps’ in order to achieve personal mastery.

Steward leaders need vision, both personally and more generally, to be able to lead others. It is important to know where you want to go and be willing to continuously learn and strive to get there. Effective steward leaders have a vision of making a difference, in the lives of others, the community (whether business or civil society), and in the nation, since they fundamentally believe in a greater positive outcome at the end of the relentless journey.

While Kathrada’s contribution to society in South Africa in particular, is felt most strongly in the political and human rights sphere, steward leaders in the business world can have a tremendous impact when it comes to promoting more sustainable, ethical, economically sound and human-oriented practices. By developing and promoting others (even taking “chances” on people), and inspiring them to be courageous and resilient, companies can also achieve more – not only in terms of productivity, but also in terms of impact and social consequence. At this time in South Africa, with complex political and social turbulence, as well as a stagnant economy, we need steward leaders like Kathrada more than ever.

The steward leader seeks to be the ‘best for the world’, not only the ‘best in the world’ and, in my experience, many executives exhibiting a certain maturity, develop a concern or orientation for the “common good” and become interested in issues relating to wider society. This country has many such leaders, across the broad spectrum of society and at all levels, ready to step up to take this country forward. And if leaders are open to being developed and are willing to make positive and constructive choices, they can move beyond the traditional selfish and narcissistic expectations of leaders, to become leaders who care about others. It is our challenge to find ways to support them on this journey.