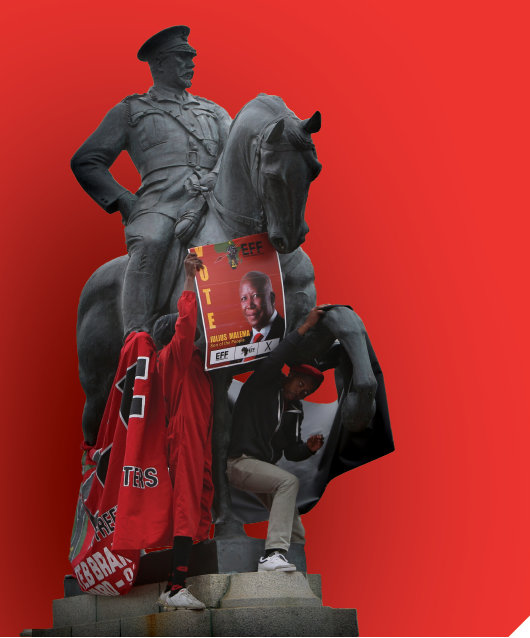 Talk of radical economic transformation, a concept that has dominated public discourse in recent months, is an outcome of government policy failures which have left the majority black population on the margins of the mainstream economy, speakers argued during a panel discussion organised by the University of Cape Town Graduate School of Business (GSB) in April.

Associate Professor Mills Soko, the director of the GSB, chaired the well-attended discussion, which was at times highly charged and emotive. The panel comprised Mncane Mthunzi, the president of the Black Management Forum, an organisation which has been advocating and lobbying for transformation in corporate South Africa; Sean Gossel, a senior lecturer in Finance at the GSB; and United Democratic Movement (UDM) Member of Parliament and chief whip Nqabayomzi Kwankwa. Soko said attempts to invite a representative of the ruling African National Congress (ANC) had failed.
Opening the discussion, Mthunzi said South Africans had been “fed reformation disguised as transformation” over the past 23 years.

He emphasised that transformation cannot happen without pain, and businesses and institutions have to be more willing to change and give more black people access to the mainstream economy.

“It’s a very painful process that needs to take place… businesses and institutions have been coming with a minimalist approach as far as transformation is concerned. Self-regulation has not helped. No wonder you hear the noise and militancy in the ruling party with regards to radical economic transformation,” said Mthunzi.

He argued that during the drafting of the Constitution, which was adopted in 1996, parties skated around the need for social change. There had been no social contract on how to achieve the equality and social justice promised by the Constitution.

“We missed an opportunity during negotiations for democracy to deal with issues of economic transformation and how we deal with the injustices,” said Mthunzi.

As a result, land ownership remains skewed in favour of the white minority, black representation in JSE listed companies remains low, and the household income gap between black and white families continues to widen, he said.

“No one has defined this radical economic transformation. It’s political talk. It’s just rhetoric, you cannot touch it…we do not know when it will explode, but it will explode in our faces.”

Deputy President Cyril Ramaphosa said that radical economic transformation was unavoidable. He said the idea behind the concept was fundamentally about building an inclusive and more collective economy in the country. Government hoped to create more sustainable growth, higher investment, increased employment, reduced inequality and to de-racialise the economy.

The ANC has argued that Black people constitute almost 80% of the population, yet the lion’s share of the economy in terms of ownership of land and companies remains in the hands of white people, who make up about 8% of the population.

However, Kwankwa argued during the panel discussion that the radical economic transformation narrative at the moment is being used, perhaps abused, by ANC factions jostling for power ahead of the party’s elective conference in December. He said leadership failures have contributed to policy failures, and while economic transformation is long overdue, the current discussion in government around the issue is mere rhetoric used for political mileage. Land reform was a ticking time bomb and it needs to be addressed urgently, said Kwankwa.

The debate on radical economic transformation has been simmering for some time amid general public unhappiness with government’s performance since 1994, agreed Dr Gossel. The concept, he said, should not be seen as surprising and definitely not a sudden explosion.

“Much of the frustration we see [today] largely has to do with failure to deliver on [past] promises,” said Gossel.

SA continues to record slow economic growth. Growth has averaged about 3% since 1994, which is considerably lower than 5.4% envisioned in the National Development Plan, a long-term plan articulating the country’s vision to eliminate poverty and reduce inequality by 2030. The country’s economy is likely to shrink further following the decision by ratings agencies S&P and Fitch to downgrade the sovereign debt to junk status, or sub-investment grade. The two agencies cited likely changes in economic policy after respected finance minister Pravin Gordhan was sacked during a midnight cabinet reshuffle, a move that sent the rand and markets into a tailspin and sparked widespread protests against President Jacob Zuma.

Gossel said that the country needs to go back to the drawing board and address fundamental structural limitations in the economy that are hampering economic growth and seek ways to ensure that growth can be spread across classes, races and the disadvantaged.

“You cannot have transformation in a shrinking economy that’s just received junk status…as bad as these [economic growth] statistics are I actually suspect it will get worse and therefore the political rhetoric will get ramped up …it’s all about electioneering, it isn’t about the economy…no one is talking about economic growth.”