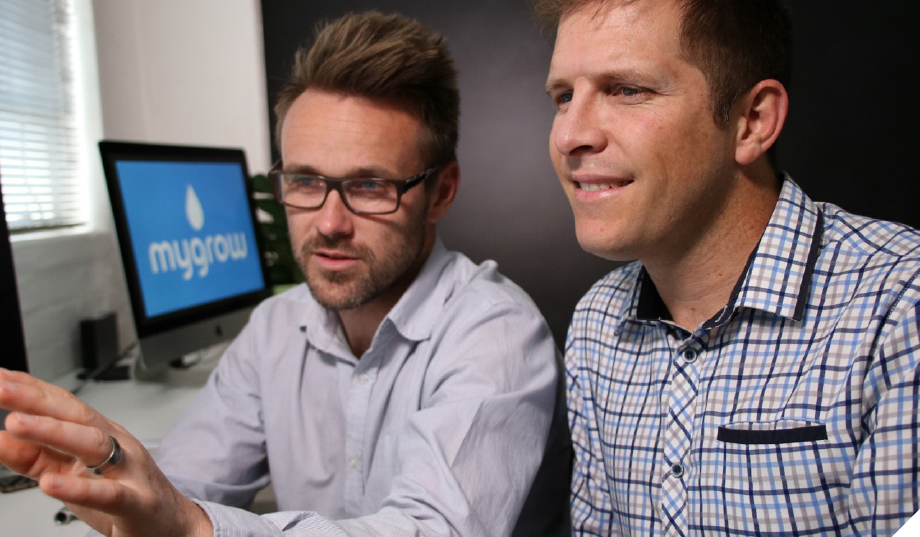 An artful combination of film and neuroscience through technology has birthed Mygrow, The Emotional Intelligence Platform. Co-founded by MBA alumnus, Mark Baker, and incubated at the UCT Graduate School of Business Solution Space, Mygrow has a bold vision for helping individuals and corporates to flourish.

Mark Baker is an organisational psychologist who believes that navigating your way through life is an emotional skill. He says, “Emotional Intelligence (EQ) impacts every aspect of our lives.” Unfortunately, many people are lacking in critical EQ competencies such as self-motivation, emotional regulation, interpersonal competencies, decision-making and the ability to manage stress.

Baker wants to change this. In 2016, he put his money where his mouth was and, with one of his oldest friends, Theran Knighton-Fitt, co-founded Mygrow – an innovative and fast-growing online platform that is changing the landscape of EQ development. Mygrow caters for both individuals and organisations and works to develop EQ skills at the physiological level using a set of daily exercises that rewire the neurological architecture in the emotional centres of the brain.

“Improving EQ skills is hugely beneficial for individuals and organisations, as it can boost productivity by as much as 40% and have a profound effect on organisational culture and staff retention,” he says.

The vision was “to put emotional intelligence in everyone’s pocket”. Baker describes Mygrow as “leveraging technology to do everything that an organisational psychologist would typically do in an organisation, at about a tenth of the cost, with a much wider reach and richer data”. The start-up was incubated in the Solution Space at the UCT Graduate School of Business (GSB) and already services clients across the organisational spectrum.

After completing an Honours degree in psychology at UCT in 2003 and a Master’s in organisational psychology at Stellenbosch in 2006, Baker spent a decade working in leadership development through organisational programmes and individual coaching. He noticed that many EQ interventions were not creating lasting impact. “I noticed that there would be a powerful initial impact on people’s lives, but they would revert to old habits, or the organisational culture would drag people back into doing what they had done before.”

“I started researching the neuroscience behind EQ and realised that the pedagogy used in traditional training and development needed to change. Developing EQ, according to neuroscience, is like developing a physical competency such as physical fitness or playing a musical instrument. You need to exercise or practice over and over again – over a long period of time. Traditional EQ development approaches are a bit like reading a Men’s Health Magazine and hoping to develop a six-pack!”

Baker realised that there is no affordable way of developing EQ skills if you rely on the traditional model of sessions with a psychologist: it is too expensive, and too infrequent. Mygrow addresses this pedagogical shift with a video-based micro-learning platform to build EQ skills through daily practice, and coaching by a team of support staff. The use of short videos, games, quizzes and dashboards to track progress make it engaging and accessible. Each 15-minute daily session practices one EQ competency, for example decision-making is improved through developing competencies such as problem-solving, reality testing and impulse control.

This has huge benefits for corporations as employees show improvement in motivation, interpersonal skills and productivity. Developing EQ also leads to effective stress management and is shown to reduce absenteeism. Additionally, it is critical for effective leadership. Baker notes, that research shows that 85% of leadership skills lie in the EQ domain.

“The innovation of this business,” says Baker, “is that we bring film and neuroscience together through technology.”

“Film is an incredibly emotive medium for con-necting with people,” says co-founder Knighton-Fitt. “This is people’s lives we are dealing with, their marriages, their self-perception, their leadership challenges. We aren’t just teaching them some ‘interesting stuff,’ we are giving them tools to grow themselves. Technology in its essence is quite impersonal, and film is one of the ways we make the growth journey more human.”

Baker’s experience in his MBA played a huge role in birthing this idea and making it a reality. “The entrepreneurial courses inspired me and initiated my conversations with Theran. Towards the end of my MBA we applied, and were selected for, the three-month Venture Incubation Programme at the MTN Solution Space. They were incredibly helpful with arranging mentors, giving us start-up advice and office space.” The Venture Incubation Programme provides support to innovative start-ups and helps them build viable and scalable businesses. After a year and a half, Mygrow matured into a fully-fledged business employing 12 people.

Baker stresses that although Mygrow is catering for corporates, the heart and vision is aimed at helping people. “There is a massive social development aspect of Mygrow,” he says. “In the wider South African context, we often try to deal with systemic issues through structural or legislative changes. It is often too expensive to scale help down to each individual. Mygrow’s mission is to scale help to the agents – to equip everybody to flourish. Ultimately we want to deal with South African problems where the systemic change is inadequate because the agents in the system are psychologically disempowered to respond to the systemic changes.”

This has huge potential in education as EQ is a better predictor of academic performance than IQ. Baker hopes to scale Mygrow to students in the future, ultimately making it a pre-requisite for higher education.

Mygrow’s users have seen massive improvements in many aspects of their lives, Baker says. “We have seen reconciled marriages, better family relationships, stronger teams, and some people have overcome social anxiety disorders. Mygrow’s EQ development process works because the pedagogy is aligned with what causes neurological change. People are literally changing from the inside out.”

One Response to Putting EQ in everyone’s pocket