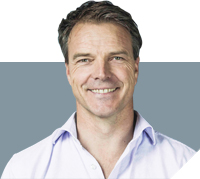 Cape Town lawyer and EMB A alumnus, Robert de Rooy, has pioneered the world’s first picture-based legal contract in a bid to enable greater legal literacy – especially among those who cannot read.

Most people don’t bother to read the small print of their legal contracts because they struggle to understand the jargon; now imagine how it must feel to be confronted with a legal document when you are not able to read at all!

With around 8% of South Africa’s population still illiterate, and many more semiliterate, Cape Town lawyer, Robert de Rooy decided that something needed to be done to help such vulnerable people to navigate the complex world of contracts and legal documents. From there, Comic Contracts – the world’s first picturebased legal contract – was born.

“Conventional contracts have always been written by lawyers, for lawyers. Trying to find a way around the legal language so that any person, regardless of their level of literacy, can understand the agreement, has been a challenging process.”

“Conventional contracts have always been written by lawyers, for lawyers,” De Rooy says. “Trying to find a way around the legal language so that any person, regardless of their level of literacy, can understand the agreement, has been a challenging process. Comic Contracts are contracts, where the parties are represented by characters, pictures illustrate the terms of the contract, and the parties sign the comic contract.

“The purpose is to improve the relationship between the contracting parties, by creating a more transparent agreement, so that both parties know what they can expect from each other.”

De Rooy points out that marrying the two seemingly opposite ideas of contract language and creative illustration, has required a whole new way of thinking. And it was while studying his EMBA at the GSB that he was given the impetus to do this.

“I’ve been a lawyer for nearly 20 years now. I also have a background in conflict resolution, and this idea started while I was doing my EMBA. Our programme placed a lot of emphasis on different conceptual models and especially systems thinking, including rich pictures,” he says.

“Systems thinking provided two key insights in the development of the idea of comic contracts, focusing on the relationship instead of the parties; and the possibilities of intervening in the system the produces a problem like conflict ‘upstream’ from the problem.”

De Rooy discovered while he was researching this, that there is a group of lawyers and academics who were looking to visualisation as a solution to improve business relationships.

“But they always emphasised the fact that the visualisations are only an aid in interpreting the contract and that it does not have legal force. This bothered me a lot because low literacy individuals would then still be legally bound to the text, the part of the agreement that they could not read or understand! It made me ask myself whether it would be possible to create an agreement using only pictures.”

He worked on the idea on and off for a couple of years, employing cartoonists and corresponding with colleagues, as a result of which he was invited to present the idea at the International Contract Simplification Conference in Switzerland in March 2016, hosted by Swiss Re.

“At that point I did not have a complete contract to present as an example of my idea, so one of my clients, ClemenGold, agreed to commission one of these contracts for their fruit-pickers being a category of their employees with low literacy levels. They gave me the budget to develop a professional quality example of the concept.

“ClemenGold subsequently signed these contracts with nearly 300 of their employees and feedback has been only positive,” he says. The concept also caused quite a stir at the Switzerland conference and De Rooy was subsequently invited to present it at the International Association for Contract and Commercial Management in the US this October. “Apart from all this, I still have to earn my living as a lawyer, spend time with my children and find time to cycle,” he says with a smile.