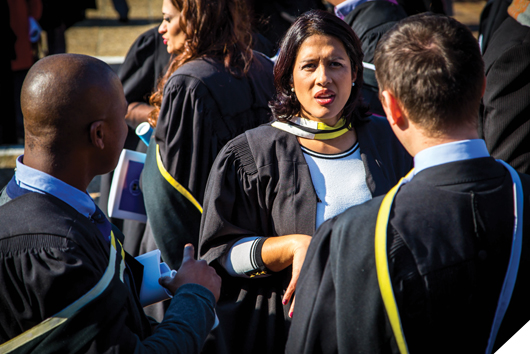 Graduates at the GSB’s June 2014 Graduation Ceremony. Photo: Bev Meldrum.
How does one ever say thank you for the gift of a great career? By giving others the same opportunities, of course, say the founders of the GSB Foundation, an independent trust that has been set up to raise funds to expand access to education at the UCT Graduate School of Business (GSB).

Late in September, Finance Minister Pravin Gordhan called on the country’s leaders to rededicate themselves to building democracy in South Africa in order to regain the trust of the global community.

This timely reminder applies to business, NGO and political leaders alike, who are called upon to rally to better the lives of South Africans. Against this backdrop, the GSB celebrated its 50th birthday in 2016. Widely regarded as the top business school on the continent, one of its core functions has always been to produce strong leaders. And in the current climate – economic, political and social – the need for ethical and informed leaders from all walks of life to take their place in society has become an urgent matter.

Enter the GSB Foundation, an independent, registered trust, NPO and PBO that was established in April after receiving the blessing of UCT Council late last year. Based at the GSB campus in Cape Town and operating internationally, the GSB Foundation fundraises for and governs an investment fund, which is managed by Investec. The trustees consist of representatives of UCT, the GSB and GSB alumni.
The brainchild of alumni and long-time business stalwarts Tiger Wessels, Stewart Cohen, Ian Kantor and Peter Thorrington-Smith, the foundation seeks to raise the calibre of leadership on the continent, by giving talented students greater access to a world-class education at the GSB, regardless of their financial circumstances.
Specifically, it is raising funds to support four key areas at the school: scholarships; faculty; research; and facilities. At the same time, candidates benefiting from foundation funding will also have access to mentorship support from the school’s powerful alumni network.

The four founders, who were all part of the MBA Class of 1969, came up with the concept after discussing the extent to which their studies at the GSB were formational. “I would have made a very poor engineer,” jokes former UTi Worldwide president Thorrington-Smith, who had indeed studied engineering at undergraduate level. “But once you have that opportunity in business, the GSB has not only given you the knowledge, but the confidence to do that job well. There were lots of opportunities – so many people from the school did well in business. As we were gathering at the 45th reunion in 2014, we all recognised how fortunate we were.”
At the time of his studies, recalls Thorrington-Smith, he received a loan of US$750, which he paid back over two years.

For Wessels, co-founder of UTi Worldwide, there was a strong need to pay forward some of the advantages he had enjoyed at the start of his career. “The [endowment] fund was an idea that was conceived by a couple of guys that the time had come to put something back into the business school,” he says. “The school had given us so much, for which we are extremely grateful. As a token of thanks, as we get into the later stage of life, it was important to put some of that back for those who are still to come.”

It was time, the founders felt, to “get the ball rolling” – and, says Wessels, there were a “great number” of graduates who felt exactly the same way.
To some degree, they say, their own classmates have stepped up to support the endowment; now they have thrown open the challenge to other MBA classes to either club together to match, or better, the Class of 1969’s donation – or to make an individual contribution.

Retailer Stewart Cohen, who co-founded the Mr Price Group Limited, says that giving back is an essential part of redress on the socio-economic landscape. “South Africa has its past, its apartheid past,” he says. “We need to pay back for the advantage that some people have received. And the area to give back is [in] education.”
Particularly business education will make a difference, Cohen believes. “We need more diverse MBA classes and they will become the business leaders and entrepreneurs of tomorrow. We need MBAs in our parastatals and even in government. That will make a huge impact over time,” he stresses.

Part of the challenge that lies ahead, says Cohen, is to wake up graduates in South Africa to a culture of giving back that is seen in other parts of the world; where business school graduates “give back in spades” where they can. “In South Africa you don’t see this same commitment to supporting those who come after and this needs to change,” he says.

And, says, Investec co-founder Ian Kantor, it is not just a moral obligation that should motivate graduates to step up to contribute. He points out that business leadership is simply no longer expected to operate in the same way and that the need to train business graduates with a wider understanding of their role in developing society is becoming critical. The GSB has already established itself as a leader in this field and with the right support, it can continue to train and equip talented young men and women to go out and make a difference in the world.

“The current interest in social entrepreneurship implies that 35% of GSB students will make a social as well as an economic impact – that is truly inspiring,” he says. Social entrepreneurship has already made a substantial impact abroad and locally; in the UK, the most comprehensive report into the state of the sector reveals that social enterprises are thriving, outperforming their mainstream SME counterparts in nearly every area of business: turnover growth, workforce growth, job creation, innovation, business optimism and start-up rates. University World News has argued that increased social entrepreneurship will be a key factor in beating corruption across Africa, while the Global Entrepreneurship Monitor (GEM) report has argued the same. The foundation’s multi-pronged approach addresses a number of related problems: in the short term, it increases access to education, while easing financial stress for its beneficiaries, while the broader crisis of tertiary education is tackled at higher levels. And in the long term, it potentially contributes to job creation as well as decreasing long-ingrained patterns of inequality.

Research has shown, over and over, that diversity positively impacts organisations of all flavours; it is therefore essential that leadership in South Africa must reflect greater diversity. This will only improve the role that management plays in business, NGOs, parastatals and government. In short, the foundation is a platform that allows alumni – not just the founders – to leave a lasting legacy for future generations, tax efficiently.

“How does one say thank you for an incredible gift you have been given? I think the right way to say thank you is to invest,” concludes Thorrington-Smith. “Given what the GSB has done for me, it’s great that there is now a fund to which I can contribute in order to express my thanks – a fund that will allow bright and inspired entrepreneurs without the necessary financial resources to enjoy the GSB experience and make a difference in the world. There is no doubt that this can be a life-changer for talented young men and women.”

To learn more about the GSB Foundation or to find out how you can make a tax-efficient contribution, please visit www.gsbfoundation.org.za.