New partnership brings a range of exciting voices to the GSB 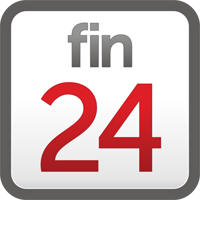 The GSB has partnered with the online finance portal Fin24 for a range of speaker events designed to bring high profile voices to the school and broaden the debate on current affairs.


“We believe in the power of bringing prominent leaders together and encouraging debate on issues that impact the South African economy and democracy,” says GSB director, Associate Professor Mills Soko. “The media plays a vital role in any free society and we are excited about this new par tnership with Fin24.”

“As a source of reliable business news, it made sense for us to team up with the GSB,” says Fadia Salie, editor of Fin24. “The business school has the credibility and connections to convene a powerful group of speakers and we have the platform to ensure that these get heard as widely as possible.”

“The GSB speaker events are always highlights on the business school’s calendar,” agrees Saskia Hickey, Market Intelligence and Strategy Manager at the GSB. “It is about quality conversations and dialogue, sparking new ideas and fresh ways of thinking about the most important drivers in the world of business as well as society at large.”

As part of the partnership, the GSB also now contributes a weekly column to Fin24.

The Bertha Centre has launched a new publication, the Innovative Finance in Africa Review, which showcases innovative models and practices of the finance ecosystem in Africa. The review emphasises the outstanding work being done and discusses the key drivers for creating system-wide strategies and new business models. It also highlights innovations to watch from more than 20 African countries.

Innovative finance has evolved over the past decade, particularly in the design and implementation of financing strategies. “Over the last five years we have worked with social finance experts and partnered with governments, enterprises and investors to research, incubate and test promising innovative financing models across Africa. This review is an introduction for stakeholders seeking to engage with this exciting space,” said Aunnie Patton Power, Bertha Centre’s Innovative Finance Lead. The review builds on the Centre’s previous reviews, such as the Health Innovators Review (2014) and SA Education Innovators Review (2015). The Innovative Finance in Africa Review discusses the nature of innovative financing, its evolution and the creation of new financing tools and categories of capital. It also features content from the GSB Executive Education Impact Investing course which was run in partnership with Oxford’s Saïd Business School’s Skoll Centre for Social Entrepreneurship.

The review ends on a very practical note detailing how governments, foundations, universities and high net-worth individuals can get involved in this space . 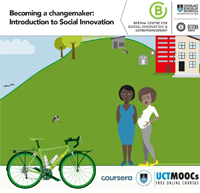 A MOOC (Massive Open Online Course) designed and delivered by the Bertha Centre was named as one of the top ten new MOOCs launched in 2016, as voted on by thousands of Class Central users in December. The list is based on Class Central users’ written course reviews.

In 2016, 2 600 new courses were launched online, across all platforms and on all subjects. “This is a testament to our partners RLabs and UCT’s Centre for Innovation in Learning and Teaching’s (UCT CILT) significant contributions, into making this an accessible, applicable and enjoyable MOOC,” said Dr François Bonnici, Bertha Centre director. The Bertha MOOC – Becoming a Changemaker: Introduction to Social Innovation – seeks to catalyse social change by empowering people to begin acting as social innovators.

The Bertha Team.
Social impact education has entered the mainstream and the GSB is among a handful of global leaders in the field – according to a new report from the Bridgespan Group. The Bertha Centre for Social Innovation and Entrepreneurship at the GSB has been profiled in the report as one of the top five university-based centres for social impact education.

There has been rapid growth in social impact initiatives at business schools within the last decade. “The report points out that ten years ago, establishing such a centre was a distinctive act of leadership,” says Dr François Bonnici, director of the Bertha Centre. “But today, almost 50% of the top 50 business schools host a social impact programme.” The report benchmarked the GSB alongside business school heavyweights including the Centre for the Advancement of Social Entrepreneurship at Duke University’s Fuqua School of Business; the Social Enterprise Initiative at Harvard Business School; the Centre for Social Innovation at Stanford’s Graduate School of Business, and the Skoll Centre for Social Entrepreneurship at the University of Oxford’s Saïd Business School.

The Bertha Centre is the only emerging economy centre featured in the report. Established in 2011, in partnership with the Bertha Foundation, the Bertha Centre’s goal is to achieve social justice and impact through teaching, research, events and actionable projects. “We have developed deep expertise in education, health and finance innovation,” says Dr Bonnici.

Dr Bonnici adds that social innovation centres can push universities to innovate and become more relevant and resilient. “This is pertinent to the #FeesMustFall debate around the shape and purpose of university education. Social innovation requires that we challenge the rules and status quo of power and exclusion by building products and processes that deliver greater social value.”

Director of the GSB Associate Professor Mills Soko agrees that business schools in Africa need to prioritise relevance and impact. “We play an important role in training business leaders and entrepreneurs to build successful businesses that move society forward, but we can also influence policy and practices to tackle pressing social problems,” he said.

“This endorsement of the Bertha Centre is a boost to what we do and an encouragement to continue with this important work.”

The GSB has won two prestigious awards from the international education rating agency, Eduniversal in its latest ranking of global business schools in December 2016. The GSB was ranked as the best business school in Africa, and the GSB’s Master’s in Development Finance was named the top Master’s degree in Africa in the field of corporate finance .

Winning two awards from Eduniversal’s 2016 ranking of business schools and degree programmes around the world is an achievement that brings fresh honours to the GSB. It is the ninth year in a row that the GSB has been named the best business school in Africa. GSB director Associate Professor Mills Soko, says the school is honoured to receive the award again. “International recognition of the school is very important to us and all our stakeholders, to demonstrate the quality of education at the GSB.”

The GSB’s Master’s in Development Finance, named top Master’s degree in Africa in the field of corporate finance, is hosted by the Development Finance Centre (DEFIC) at the school. DEFIC was launched in January 2016, and aims to grow local and international development finance expertise in emerging markets. The Master’s degree that forms a core part of the centre’s work was the first degree of its kind to be launched in Africa.

DEFIC director, Professor Nicholas Biekpe, says: “We set out to build a programme that was useful, which meant it had to be relevant. It couldn’t be all theory.” Local case studies are a big component of the course, as well as bringing in speakers from the development finance industry in Africa, to give insight into how people are dealing with real life situations.

“The GSB is honoured and delighted by these awards,” says Associate Professor Soko. “This is a tremendous achievement that shows international recognition and support for the ground-breaking work we are doing.”