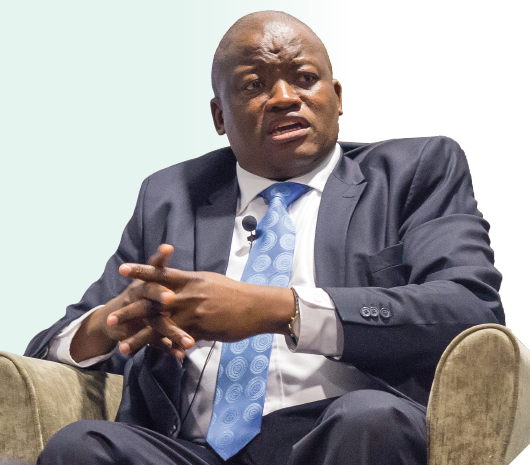 Speaking at the GSB in May, outgoing Director General of the National Treasury, Lungisa Fuzile said that an institution founded on good values and principles does not get threatened easily.

Speaking at an exclusive event hosted by the UCT Graduate School of Business a few days before his departure from office in May, Fuzile allayed fears that the removal of Finance Minister Pravin Gordhan and his deputy Mcebisi Jonas, as well as his own departure and that of deputy director general Andrew Donaldson, would leave the Treasury open to rogue elements.

“Any institution founded on good values and principles does not get threatened easily,” said Fuzile. “I can tell you that when you have an institution such as Treasury, it is very hard to come into it and disrupt the culture and therefore get the entire institution aligned to ill intentions. Such attempts, however, would disrupt the institution.”

Observers have pointed out that Fuzile’s and Donaldson’s departure, hot on the heels of the sacking of Gordhan and Jonas, signals the loss of extensive institutional memory at Treasury, which could further destabilise the department following months of turbulence. Fuzile’s contract was due to expire in May next year‚ but he asked then finance minister Gordhan to allow him to leave a year early on May 15. His resignation was made public almost a week after the firing of Gordhan and Jonas during the now infamous midnight cabinet reshuffle by President Jacob Zuma.
Fuzile said after 19 years in government, he felt he had “served his time” and it was the right time to leave, and make way for new leaders with fresh ideas.

“I have no reason to wish for an extra day after May 15. After 19 years I leave very happy to watch government from outside,” he said. Media reports last year suggested that Fuzile, Donaldson‚ and another treasury deputy director general, Ismail Momoniat, were on a list of treasury officials that the controversial Gupta family‚ associates of the President‚ wanted to get rid of as they attempted to ‘capture’ and gain more control of the National Treasury. The new Finance Minister, Malusi Gigaba, is alleged to have a close relationship with the Guptas.

However, Fuzile was reluctant to comment on suggestions that the recent developments in Treasury were linked to the state capture allegations. “I have heard the issue of the connection between what has happened at Treasury and state capture. I have my views on it, but as you can imagine its deeply political and contentious.”

Fuzile said that his departure and that of other senior officials would not necessarily lead to a change in fiscal policy or the mandate of National Treasury. The work of the institution is reinforced by the Constitution and other key legislation, he said. Furthermore, competent and highly skilled officials such as Momoniat would continue to occupy key positions in the department.
“It will be hard to change such people and make them think the Constitution doesn’t matter. It will be hard to rewire them so that they think that sound fiscal management belongs in the dustbin. I don’t want to say it won’t happen but it’s hard to see it happening,” said Fuzile.

Fuzile also talked about “radical” economic transformation, a concept which has come to dominate public discourse in recent times.

Using the term “radical” in discussions about economic transformation is unhelpful and should be seen as politicking, he said.

“My interpretation of radical is that it’s just politicians. By the way, those who have studied marketing will know that just by adding ‘new’ to a product changes how that product is perceived by the people who receive it, and politicians are in the business of marketing themselves and their organisations. So we should not be too surprised when they add adjectives like radical,” said Fuzile.

Fuzile said economic transformation was primarily about inclusive growth. “Let me leave the ‘r’ for now and say to you would you disagree that a country with a history like ours needs economic transformation? … The economy must grow at accelerated rates and in growing it must not only deliver the revenue government needs to pay the social wage, but it should give people who have been left out of the mainstream economy opportunities to participate meaningfully whether as business people or as workers.”

“We need an economy that is competitive, certain industries are highly concentrated. We need to focus on regulation to reduce barriers to entry to force completion,” said Fuzile.

The outgoing Treasury director general is an avid cattle rancher and is likely to focus on his farm in the Eastern Cape for the foreseeable future. He talked at length about the land question, which has unsettled many in the agricultural sector.

Fuzile said the current land reform programme was “on a road to nowhere”. There was an emphasis on redistribution and not on training up and coming farmers, which is a threat to food security, he said.

“Some of the land that has already been redistributed may not be used as effectively and productively as it should. We need programmes to skill the people who have the land to assist them in whatever way necessary and possible to put that land to productive use.

“[I am not] suggesting that accelerated redistribution of land is irrelevant and unnecessary. It has to be pursued with a lot of energy and vigour [but] within the framework of the law.”
If it was pursued outside the parameters of the law and without certain measures in place to maintain productivity, then the land redistribution programme would in all likelihood fail, said Fuzile.

“Redistributing land then becomes a failure in terms of food security, agricultural production, and agricultural employment. You can’t do that.”

Mr Fuzile was in conversation with GSB director Professor Mills Soko as part of the school’s Distinguished Speakers’ Programme.