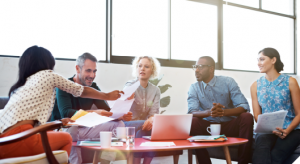 Rising racial and political tensions and a deficit of authentic leadership in society are adding to difficulties facing businesses operating in South Africa.

The current racial and political tensions in South Africa are playing out in the SA workplace where leaders and managers have to view the handling of racial conflict as a real issue, similar to managing stakeholder relations.

The fires are being continually stoked amid a talk of ‘Radical Economic Transformation’ a concept which some view as tool to ‘loot’ especially from white owned businesses to “radically enrich a small elite”, including President Jacob Zuma and his associates, the Guptas.

Social media platforms have also been awash with debate on racial issues in recent times. Former Democratic Alliance leader and Western Cape Premier Helen Zille, who faced disciplinary action in the party following her tweets in which she appeared to extol the benefits of colonialism, stated in a recent opinion piece that “critical race theory” that regards “whiteness and whites” as the key obstacle to the progress of black people in South Africa has started to emerge in the country.

Zille wrote: “The buzzword transformation has been replaced by ‘decolonisation’. Stripped of its academic veneer, this means all whites are colonisers and have no place in the new South Africa unless they retreat into guilty self-flagellation… The condemnation of a whole category of people because of their (white) race is the new face of racism in South Africa, and it has taken us a long time to wake up to it. Like all populist, blame-shifting philosophies, it is catching on fast, and it has potentially perilous consequences for South Africa’s future.”
Meanwhile, the President himself says the people protesting to get rid of him are ‘racists’. This is a disingenuous diagnosis of what is going on. It is also shaming. And that whole shaming discourse is causing a further alienation and lack of participation.

South Africa has to manage these racial tensions actively and do away with the blaming and shaming discourse that has come to dominate the current political climate. Zille’s original tweets for example are hurtful since they ignore the understanding and appreciation of the repercussions of Africa’s colonial past and the complexity that results when a culture is dis-membered – as Ngugi Wa Thiong’o would say.

When you blame and shame you are responding from your lowest self and you are not dealing with the real problems we need to fix such as inequality, poverty unemployment, and a lack of economic participation. Those are the things we need to keep our eyes on.

All of this is pointing to the fact that South Africa has a serious deficit in authentic leadership in society. Why can we not have a hundred Mandelas, or a hundred Kathradas, or a hundred Mbekis? Perhaps if we did we would not have this crisis we are in.

Authentic leadership, means having your ‘best self’ show up when making decisions. Despite it emerging as the gold standard to strive for in leadership development, authenticity remains an elusive target for many leaders in our society. Being true to yourself and being genuine have emerged to define authenticity as a behavioural state. When one is being authentic, by implication one is being deliberate about the action one is taking; the specific choices that one makes resonate with dearly held values, as well as an overall narrative about how one wants to live one’s life. When one is being authentic, there is thus a strict coherence between what one feels and what one does or says. It is much less likely that people will lapse into blaming and shaming if there is such coherence.

The benefits of living authentically can be said to amount to greater well-being, better life-performances, more emotional commitment, and less apathy; and those who pursue authenticity buy into these long-term benefits.

It is for this reason that the work of business schools must be not only to impart the relevant business skills to our students but also to encourage them to access their best and most authentic selves as they step out into the leadership space in this country – and beyond its borders.

Inevitably, racial and other societal tensions have permeated the classroom too and that contestation can be quite explosive. As such, the classroom can be a useful laboratory for how to manage racial tensions in the workplace and in society. We try to encourage students to respond from the authentic insightful self, to eliminate a response from their lower selves.

We are dealing with complex challenges with no easy answers. You cannot give someone a theory about racial conflict, nor can you give a theory about transformation. These are the things we are struggling with and we cannot get it right through legislation or learning. Ultimately, we need better empathy and leaders who are more benevolent in their outlook and we need to approach the reality of racial tension with our eyes wide open.