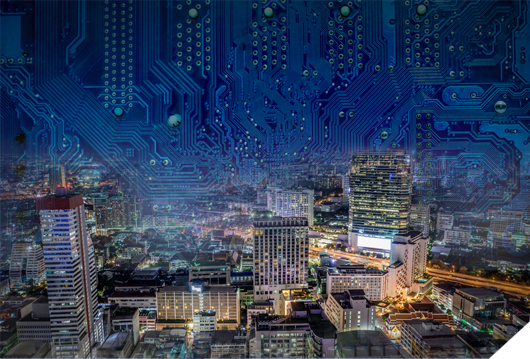 Autonomous technology – an Internet of Intelligent Things – can provide the infrastructure to enable aspects of economic growth across Africa, but realising the potential of the next wave of digital innovation will depend on effective public policy.

Late last year, Senegal’s Banque Regionale De Marches announced the launch of the eCFA Franc, a cryptocurrency for the countries of the West African Monetary Union: Senegal, Cote d’Ivoire, Benin, Burkina Faso, Mali, Niger, Togo, and Guinea-Bissau. A milestone for financial services and regional collaboration in Africa, this and similar innovations mark the coming of age of a new generation of blockchain applications; an Internet of Intelligent Things that could provide a new infrastructure for economic development.

In essence, the blockchain, mostly known as the technology underpinning digital currency Bitcoin, is an almost incorruptible digital ledger of transactions, agreements, contracts – anything that needs to be independently recorded and verified as having happened – that is distributed across several, hundreds or even thousands of computers globally. Now, new platforms such as Ethereum are emerging to support the development of distributed applications – DApps – that are providing user-friendly ways to use blockchain. In the same way that web browsers made the internet useful, DApps act like “autonomous agents”; little brains that receive and process information, make decisions and take actions. When linked to a cryptocurrency like the eCFA through “smart contacts” that are also securely recorded in a blockchain, these new capabilities will have widespread implications.

Step-wise innovation that will redefine how we live and work

Because the DApps, that are now populating the blockchain in their millions, can be programmed to take data-informed actions without human intervention, platforms like Ethereum are also transforming the Internet of Things (IoT). The IoT has been around since 1990, when a toaster was first operated via the Internet, but its applications have since expanded and diversified with cheap sensors and ubiquitous bandwidth, sparking enthusiasm for information management, smart cities and a wealth of consumer devices. DApps provide a practical and affordable means of making Things intelligent and able to interact directly with similar Things. This step-wise innovation is causing agencies such as the European Union to consider new regulations to govern the use and creation of robots and artificial intelligence including the proposal of legal status for robots that would be analogous to cor porate “personhood”.

Overcoming the limitations of inadequate infrastructure in Africa

There are particular possibilities here for Africa. The potential for Africa’s economic growth is well established. And there is an abundance of opportunity for digital innovation, as a recent continent-wide entrepreneurship competition organised by the UCT Graduate School of Business has shown. But there are also the limitations of inadequate infrastructure. While intelligent refrigerators, driverless cars and domestic robots continue to make news, the potential for sustainable improvements in the quality of life is in a quieter revolution of everyday systems and facilities including innovations in financial services, and the provision of affordable and reliable services where blockchain-based solutions could leapfrog traditional or non-existent technology infrastructures and drive a new era of more inclusive growth.

Economic growth is underpinned and enabled by appropriate financial services. While early internet-based innovations such as M-PESA have clearly demonstrated the appetite for accessible, Internet-financial services, many small and medium businesses are still restricted because of a lack of access to standard loan financing; in the absence of traditional title deeds to land and buildings, or a conventional payslip, banks will not extend the credit facilities that are a standard requirement for investment in potential and success. But as Don and Alex Tapscott show in their recent book, Blockchain Revolution, the new blockchain can be “the ledger of everything”. Once tagged with a geospatial reference and sensors that monitor its continuing existence, a house can become an intelligent entity registered on a secure, distributed database. Through an Ethereum-based smart contract the owner of the asset can secure a loan to expand a start-up enterprise. Intermediary arrangements, such as registries, deeds offices or patronage arrangements with local politicians and officials become unnecessary. As economist Hernando de Soto, author of The Mystery of Capital, puts it, this could create “a revolution in proper ty rights”.

Economic growth also depends on affordable and reliable services, such as water and energy. Here, again, the new Internet of Things has the potential to compensate for the legacies of underdevelopment. Water is an increasingly scarce resource in many parts of Africa, particularly in cities, where rapid increases in population will make old precepts of urban planning redundant. Autonomous agents positioned across all aspects of water reticulation systems can monitor supplies of potable water, storm water and waste water, taking appropriate actions to detect and report damage and leakage and close off supply lines. Smart devices can also monitor water quality to detect health hazards, and regulate and charge for water consumption.

Similarly, for the supply of energy, smart devices are already being deployed across conventional and aging power grids. In Australia, for example, intelligent monitors detect when an individual pole is in trouble, report the fault and call out a repair crew and communicate with other poles to redirect the supply and preserve the integrity of the grid. More widely, intelligent Things will be deployed across aging networks of pylons.

In parallel with conventional systems of supply, new digital technologies can enable full integration with renewable sources of energy and the intelligent management of supply at the household level. Because the new blockchain is designed for secure peer-to-peer transactions combined with incorruptible contracts between multiple parties, individual households can manage their own supply and demand to incorporate self-generated energy. A house equipped with a simple windmill and a roof made up of photovoltaic tiles could sell surplus power to a neighbour in need, or buy from another house to meet a shortfall. Intelligent houses could predict their energy requirements from weather forecasts and could take actions in response to non-routine events, such as a system fault or a spike in demand caused by a family celebration. Such microgrids are already in development; the combination of ubiquitous and affordable bandwidth and low-cost autonomous agents could bring affordable energy to communities who have never had the benefits of dependable electricity supply.

Smart houses, secure in the blockchain and empowered by autonomous agents, could prove their existence as collateral for loans, monitor and optimise their supply of water, and generate, manage and negotiate their own energy supplies. In turn, a new infrastructure built up in this way could be a springboard for economic development, from small enterprises that would have the resources to take innovations to scale, to significant household efficiencies and increases in consumer purchasing power. As has been the pattern with previous digital technologies, costs of production will fall dramatically as the global market for Intelligent Things explodes. That which seems extraordinary today will be everyday tomorrow.

The established interests that stand in the way

The constraints on the deployment of a new digital infrastructure will not come from the technology but rather the established interests in play including state enterprises and near-monopolies that are heavily invested in conventional systems, local patronage networks and conventional banks, and the failure of political vision. Realising the potential of the next wave of digital innovation will depend on effective public policy and business, government and civil society innovators need to be directing much of their attention here .

This is why the West African Monetary Union’s cryptocurrency initiative is encouraging. Don and Alex Tapscott comment that if we get this right, “we will move from an Internet driven primarily by the falling costs of search, coordination, data collection, and decision making – where the name of the game was monitoring, mediating, and monetizing information and transactions on the Web – to one driven by the falling costs of bargaining, policing, and enforcing social and commercial agreements, where the name of the game will be integrity, security, collaboration, the privacy of all transactions, and the creation and distribution of value”.