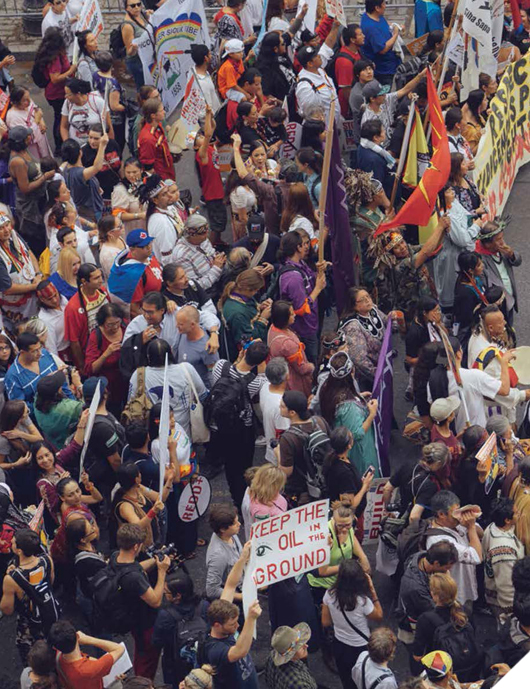 Savvy investment firms would do well to heed the growing voice of socially conscious investors calling for more ethical investments that earn profit with principle.

As hundreds of thousands of people around the world took to the streets this September to protest against climate change ahead of the UN climate summit in New York, news also broke that the Rockefeller Brothers Fund, an $860-million philanthropic organisation, has joined the divestment movement and is pulling its investments out of the fossil fuel industry because of concerns around climate change.

The irony that the Rockefellers amassed their fortune on the back of oil is not lost on the fossil fuel divestment movement, which began a few years ago on US college campuses and was partly inspired by the success of the antiapartheid campaign. The movement quite simply urges investors to use their money to send a message to an industry widely believed to be behind the climate crisis by getting rid of stocks, bonds, or investment funds in fossil fuels.

Around the world a slew of institutions, cities, foundations, organisations and wealthy individuals have heeded the call and have made divestment commitments. Arabella Advisors, a firm that consults with philanthropists and investors to use their resources to achieve social goals, reports that groups have pledged to divest assets worth more than $50 billion from portfolios, and the individuals more than $1 billion.

These commitments demonstrate vividly what research is validating; that investing for impact (IFI) – defined as the allocation of capital into investments that combine financial returns and positive impact on society and the environment – is gaining ground worldwide.

According to a recent PwC survey of US asset managers with a significant portion of investments in markets across the globe, four out of five international investors have considered IFI in one or more investment contexts in the past year. About 85% said they expected to consider them three years from now.

Research from the UCT Graduate School of Business backs this up. The African Investing for Impact Barometer 2014, released by the Bertha Centre for Social Innovation and Entrepreneurship in September, shows that IFI is on the rise in Africa’s two biggest economies. The largest study of its kind, the Barometer surveyed more than 1 200 funds managed by investors in South Africa and Nigeria and found that almost half of them do speak about IFI.

These numbers herald a shift in the investment industry, although it has not yet reached its tipping point. The UCT research, which is the first study to try to measure and understand this burgeoning investment trend in Africa, points to a lack of clear and broad communication from investors as one of the factors possibly holding things back.

The majority of South African investors – 82% of private equity firms and 60% of asset managers – have a dedicated section on their website for their IFI activities. Barometer researchers found, however, that more details could and should be given on the practical implementation of their IFI policies. The same situation was also observed among Nigerian investors. Most of the financial institutions surveyed do not display much – if any – detail on how they include impact criteria in their investment strategies.

Investors’ commitment to local and international disclosure and reporting codes and principles are also useful for getting a better understanding of the IFI industry. The UN-supported Principles for Responsible Investment (PRI) is the leading association for IFI players in South Africa, followed by the local CRISA (Code for Responsible Investment in South Africa). PRI and CRISA signatories commit to disclose and report on their IFI practices. However, the Barometer reveals that the level of disclosure and reporting varies widely from one investor to another.

The PwC report found similarly that a lack of options and poor corporate reporting about sustainability are preventing individual investors from acting on their beliefs. As a result, the market for IFI investment products remains under-developed.

Without more genuine dialogue between investors and their financial planners, investors are hampered in their choices. Part of the problem is that the modern structure of retirement fund plans makes it difficult for even the most socially-minded investor to direct the make-up of their portfolio.

But as more and more investors start to demand a more ethical world, there is an opportunity for savvy investment outfits to meet their customers where they are and give them more opportunities to align their investments with their ethics.

There is much positive difference that this can make. While divestment of fossil fuel and climate change is becoming the flagship of a new generation of activists, James Gifford, senior fellow at the Initiative for Responsible Investment at the Harvard Kennedy School says that there are also many other challenges that responsible investors can engage with investee companies on, including human rights and labour standards in supply chains, gender diversity, anti-corruption, biodiversity loss, excessive executive remuneration and conflict minerals, for example.

With Africa’s biggest institutional investment market, South Africa has a total of R4 trillion assets under management, of which retirement funds represent about half. This is a substantial sum with which to send a message of change.

The IFI market is big enough now to prove that there is money to be made from sustainable and responsible investments, but the only way to accelerate that is through demand. Whether that means engaging with employers on their practices, or taking the reins on their personal portfolio, individual investors are the ones who can move IFI into the spotlight and from niche to mainstream investing.