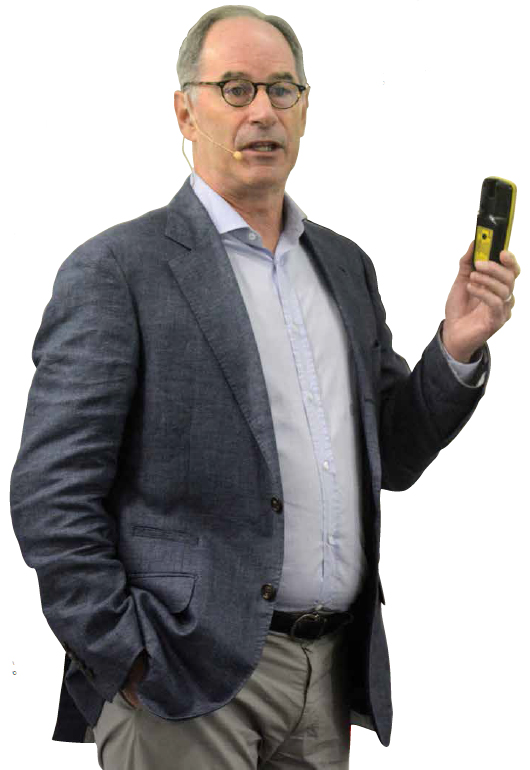 Professor Roger Martin addresses an audience at the GSB.
Future-ready leaders need to learn how to collaborate with those who think differently from themselves and integrate analytical and intuitive thinking modes if they want to get beyond the limits of their own knowledge or experience and create new solutions.

“Poetry, coding and philosophy.” These are the subjects that Professor Roger Martin, global influencer in management strategy, design, innovation and business education, believes are most important for all who aspire to future-ready leadership in the 21st century.

Director of the Martin Prosperity Institute at Toronto University’s Rotman School of Management and former dean of the same institution, Martin was speaking on strategy and innovation for transforming organisations at a breakfast hosted by the UCT Graduate School of Business, the Bertha Centre and Deloitte. He challenged leaders in business and business education to consider whether they were sufficiently geared for the innovation challenges of the dynamic, complex environments that characterise modern economies.

Martin suggests that most US business education is failing business. It needs, he says, to wake up to the thinking that is more suited to the world, as “there is way more innovation going on in business schools” in other countries.

According to Martin, education that does not embrace the perspectives of others, can’t teach how to use and capitalise on the diversity of thought available. Yet, the value of inter-disciplinary teamwork, which is crucial for problem solving in the contemporary era, is best realised by people, he reflects, who have learnt how to collaborate with those who see the world differently from themselves. And in doing so, they are able to create solutions that are greater than the sum of their own knowledge or experience.

Martin says that data-driven, analytical thinking remains the default thinking mode in business – upheld in Aristotle’s much-referenced Analytica Posteriora. However, this limits business strategy to what is known and has already happened. It results in business models that are built for reliability and optimisation; based on exploitation of what already exists.

This is fine, up to a point, but what is needed for strategising and designing effectively for the future, he argues, is an alternative way of thinking that integrates intuitive thinking with analytical thinking. Here he counterposed Aristotle’s other great, but significantly less read, work Rhetorica, a treatise on the art of persuasion, which encourages thinking that is based on judgment and instinct.

It is a way of thinking that encourages creativity, and extends the business model to include an exploration that goes beyond what already exists.

In Martin’s view, business thinking needs to land at the nexus of these two edges.

This new approach requires, he suggests, that the central question dominating business thinking should change from, “What is true?” to “What would have to be true for this idea to be a good one?”

And, the thinking capacity of the most effective person in any organisation will draw on both analytical and intuitive thinking, he insists.

Martin advances Design Thinking – the design-led innovation methodology – as the thinking needed for synthesising analytical and intuitive thinking, and integrating modes of exploration and exploitation. In Martin’s view, design thinking enables the best forward-looking solutions; giving organisations a critical competitive advantage in the contemporary era. It is the key, he says, to future-forward business leadership that can innovate in complex, fast-changing modern economies.

In advocating the kind of thinking necessary for the integrated world, Martin believes contemporary business leaders need to integrate the unknown in their strategy and plans, and have the ability to construct compelling arguments to advocate for their solutions. This is what makes disciplines like philosophy, which teaches rhetoric, so important. Martin is a leading expert on integrative thinking, business design strategy and country competitiveness, and the go-to strategist and adviser to some of the world’s leading companies, like Lego and Procter and Gamble. He heads the Skoll Foundation and holds the Premier’s Chair in Productivity and Competitiveness in Toronto, Canada, and his accolades include being named one of the most influential designers in the world, one of the 10 most influential business professors in the world, and the third most influential business thinker in the world. He has authored and co-authored 11 books.

He is described by Professor Kosheek Sewchurran, director of the GSB’s Master’s in Executive Management as “the most effective concept maker in business education in the 21st century,” based on the numerous successful interventions that Martin has introduced to business education. Sewchurran says the significance of Martin’s contribution lies in his ability to match the systemic changes he considers necessary with innovations in education and ideas.

Martin’s recognition of the attributes that contemporary leaders require is particularly pertinent to the global economy of the 21st century. This is reflected in the central focus of this year’s World Economic Forum that sought to understand the implication of the rapid digitisation for decision-makers in industry and government, who are responsible for developing solutions in an increasingly complex, connected and fast-paced world. In South Africa the challenges – and opportunities – are significant too. The Global Entrepreneurship Monitor (GEM) 2015/16 country report for South Africa paints the picture of a stagnating economy that needs opportunity-driven entrepreneurship for employment creation and economic growth. Yet, the country struggles to convert its comparatively high record for innovation into viable enterprises.

In this context, design thinking’s human-centred innovation process can act as a change-maker for leaders. As Richard Perez, director of the Hasso Plattner Institute of Design Thinking at UCT (d-school) and a panelist on the discussion that followed Martin’s presentation, explains – design thinking adds the desires and needs of humans to the financial viability and technological feasibility on which business usually focuses. The innovation that happens at the nexus of these three (viability, feasibility and desirability) is more likely to succeed because it reflects what people – the end-users and – actually want, and are suitable to the contexts they experience.