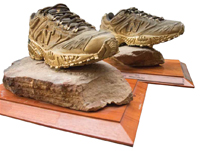 This October several of the GSB’smore determined students, alumniand faculty took on the arduousThree Peaks Challenge. The traditionis one of the oldest of the school –stretching back to the late 1970s.

In 1979, GSB MBA student, Michael Main decided to formalise the school’s ThreePeaks hike into a formal and timed event.Mike became the official GSB record holderof the hike completing the 17km route in3 hours 39 minutes. Since then, the schoolhas turned this test of determination into aregular tradition, with students, alumni andfaculty taking to the hills en masse at leastonce each year ever since.Starting in front of the GSB’s former campus(just above Marquard and Tugwell residences inRondebosch), the route leads to the top of Devil’sPeak via the treacherous ‘Knife’s Edge’, and thenacross the ravine, up onto the ‘real’ Ledges ofTable Mountain and on to Maclear’s Beacon. Fromthere, participants must descend the infamous andexcruciating Platteklip, and continue along TafelbergRoad – crossing Kloofnek Road for the final ascentup Lion’s Head.

Long-time alumni supporter and sponsor of the eventPeter Major, director of mining at Cadiz CorporateSolutions, says that while there are certainly moreextreme and challenging events nowadays, the ThreePeaks has a special place in the GSB’s calendar. “Idon’t think we pretend that it is an overly difficult orprestigious course. What it is, is a challenge exclusiveto the GSB, and it is definitely held very close to thehearts of students and alumni alike.”

Peter has run the race 22 times, winning it on a staggering 15 occasions – so far. He was the firstman home in the latest run, a feat that is particularly noteworthy because he had seemed to have hungup his running shoes these past few years. But hesays that, despite a messy motorcycle accident a few months ago, he was keen to give it one more go.After all – it is the GSB’s 50th anniversary year!

“Memories can really fool you” Peter says. “You always ‘remember’ Three Peaks as being easier thanit actually was. And so when you do it again – bam– you get the shock of your life. You’d think I would learn from all these years. After all – isn’t that why we did the MBA in the first place? To learn to use our head – instead of our body?”

While Peter is not the only person with a long history of supporting – and winning – the challenge there is, as former GSB Alumni Relations Manager Linda Fasham, puts it, no person who knows more aboutthe history and running of the event. He held the record of 2 hours and 40 minutes until it was broken by MBA Paul Donald in a time two minutes quicker.

According to Peter, those who finish the race are rewarded with a beer, a commemorative T-shirt,a firm handshake, a pat on the back and amazing lifelong memories! “Oh – and the unwritten rule is that no student who completes Three Peaks ever fails their MBA,” he says.

The top man and woman home also get a trophy – a bronzed running shoe – each from a pair of Peter’s winning footwear that he donated for the purpose some years back.

This does not mean that participants don’t take it extremely seriously, he adds. “I remember back in 1984 when Mike le Plastrier and I ended up tied for first place. This, of course, was not good enough for the very competitive Mike and so one afternoon about three weeks later he ‘out of the blue’ challenged me to a rematch – just so we could settle on a clear winner,” Major recounts. “I lost that one by about 100 metres. Dammit!”

“This adventurous spirit comes out again every year,and each year we see a new class with some new and different ‘spark plug’ student(s) intent on making‘their’ Three Peaks more exciting and memorable than the last. Most years I hear comments from the faculty, telling me that they have a super ‘special’,dynamic and motivated class ‘this year’.”

Twenty five people braved the mountain this October to try their luck. Peter points out that it was a relatively tough run: “The path was probably the most overgrown and unmaintained it has ever been. It is very brushy and full of blister bush.Horrible!” Fortunately, the weather which is always unpredictable – and can make the trek a real ordeal– was very favourable.

Coming in tied second place after Peter were Wouter Vink and Ryamond Grieg. The first woman home was Ashleigh Crosland.