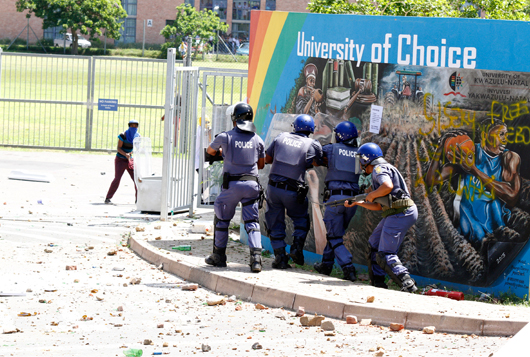 The debate on decolonising the curriculum needs to be about how we add to, and grow, what we have rather than what we should lose. There is an opportunity here to forge a powerful new narrative and identity for South Africans.

As a young black undergraduate studying in the UK more than 15 years ago, I remember the first time I came across the view-point of a black academic, because it was that unusual. The academic was Professor Stella Nkomo, a pioneer in the research of race and gender in organisations, and the experience for me was profound. I was not alone.

So when South African students talk about feeling alienated because the examples in their curricula are all from overseas or feature dead white men, I know exactly how they feel – and why it is important to change this.

How we do this, of course, is far from clear and the violent clashes between students and police, and rhetoric around the issue both on and off campuses in recent months, are an indication of just how difficult and sensitive an issue this is.

The theme of decolonisation is not new. From Derrida to Said, Spivak and Bhabha, it is a field of study several decades in the making. Yet the problem remains essentially unresolved and in recent times there is a sense that it has been somewhat side-lined. Scholars Martin Fougere and Agnet Moulettes in their recent paper A postcolonial deconstruction disclaimers, dichotomies and disappearances in international business textbooks argued that the tendency has been towards political correctness, where the importance of cultural sensitivity is named but not really embodied. And, that an awful lot is left unsaid about colonial history. Thus, there has been a kind of glossing-over of the issues at the expense of real change and engagement.

A certain amount of this has undoubtedly happened at institutions in South Africa. Since the glory days of 1994 there has been much talk and some action towards transformation, but clearly not enough has actually changed. As the #FeesMustFall protestors express, the experience is still, by and large, one of exclusion.

The problem of parody

Fixing this is no easy task. For starters, before we even start to play the game, it is difficult to establish what the board looks like. For instance, what is this thing we call “Africa” or “African” that we wish to infuse into our curricula? When you unpack it, the notion of “African”’ is largely a social construct that is not borne out by facts. Somalia is different to Zimbabwe and one cannot mistake Egypt for South Africa.

And if we are all just one big happy family as this narrative of an African identity suggests, what is the xenophobia we have seen playing out across South Africa in recent years all about? And by the way, these attacks also happen on campuses.
We have the same difficulty when trying to get to grips with what are we trying to decolonise. What are we trying to get away from? What is this “western hegemony” we hear so much about?

As the philosopher and novelist Kwame Anthony Appiah wrote in The Guardian recently: “The use of the term ‘west’ is in and of itself problematic. Is it a contrast between east and west / Europe and Asia – as it was used in the 18th century or between communism and capitalism as during the cold war? “

Appiah writes, “the west” seems to mean the north Atlantic, Europe and her former colonies in North America. “The opposite here is a non-western world in Africa, Asia and Latin America – now dubbed ‘the global south’ – though many people in Latin America will claim a western inheritance, too. This way of talking notices the whole world, but lumps a whole lot of extremely different societies together, while delicately carving around Australians and New Zealanders and white South Africans, so that ‘western’ here can look simply like a euphemism for white.”

It’s enough to give anyone a headache! As Said himself identifies in his ground-breaking treatise Orientalism, in caricaturing and parodying the other you run the risk of absurdity. Additionally, if we lose ourselves in an obsession with the terms “African”, “colonial,” “western” or “white”, then we run the risk of being trapped in these identities and miss an opportunity to forge something larger.

The difficulty of laying claim to knowledge

Even if you answer the questions of “what is Africa” and “what is western” satisfactorily for yourself, you still have to contend with another thorny question on the path towards decolonisation: What is knowledge? More specifically, who owns it?
When one student protestor called for the scrapping of “white science” from the curriculum last year she seemed to be implying that some ideas are inherently non-African. But to assign the theory of gravity to the white west is to misunderstand the history and origins of some of these things. Knowledge is not really owned by anyone – it is a cumulative and shared resource that is available to everyone.

There is perhaps no better way to illustrate this than with the fact that the classical inheritance of Greek and Roman learning, hailed by many as the foundation of western civilization, is actually an inheritance shared with Islam – traditionally an enemy of the west.

The BBC documentary Mistaken Identities, points out that the Islamic world had a significant role to play in preserving this knowledge during the dark ages, after the fall of the Roman Empire, until it was recovered by European scholars during the Renaissance. In Baghdad during the ninth century Abbasid caliphate, the palace library featured the works of Plato, Aristotle, Pythagoras and Euclid, translated into Arabic.

The knowledge did not belong to the Europeans any more than it belonged to the caliphate, but it was useful to the human project more broadly. Both sides would have been foolish to discard it.

So, back to South African universities – the conversation here would benefit more if it was not about what needs to be taken away. We should be striving for the best of both worlds not an either/ or. If there is African indigenous knowledge out there – then yes, I want more of it. If a “western” scientist has the cure for cancer – then, yes, I want that too!

The only way through this is together

Rather than polarising and “othering”, we need to move towards the middle ground where ideas can be exchanged and built upon, and it is crucial that we foster dialogue to facilitate this exchange. Universities are traditionally spaces where ideas can be rigorously and critically debated and they need to step-up and own this space at this difficult and exciting time in this countr y’s history.

As the distinguished scholar Philip Altbach has pointed out, education has certainly been one of the most important (however insidious) vehicles of colonialist appropriation. It also, therefore, has the power to play a crucial role in forging a new narrative for this country and continent that is both global and local.

What is at stake is our very identity and potential. We can become visible when we see ourselves reflected in what we are studying. Let’s not waste this opportunity.