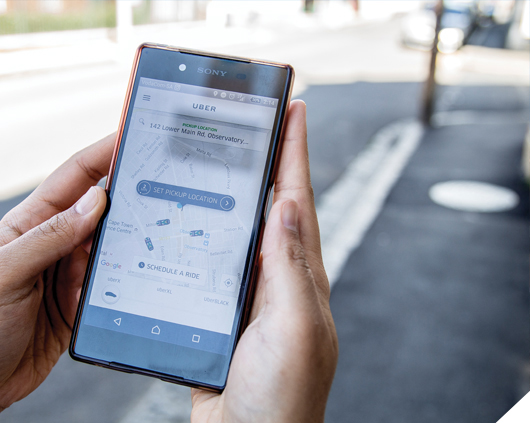 Business models based on matchmaking platforms – like the controversial Uber – could boost growth in SA, but they should not be embraced uncritically.

Most South Africans have heard about Uber, not only because of the company’s thorough marketing tactics, but also because Uber has been in the news for all the wrong reasons.

Spawning strikes and protests from the traditional taxi industry, as well as outbreaks of violence and intimidation, the service – which has been hailed as a business model innovation by many a scholar – is doing what technology innovation does best – disrupt.

Uber’s is described as a collaborative consumption (CC) business model, which is a derivative of the sharing economy – an explosive new phenomenon that is taking the world by storm. According to global law firm Norton Rose Fulbright, such business models are not a fad, but an unstoppable force that has taken root in the wake of the financial crisis. Now generating around $15 billion US in global annual revenue, according to a recent PwC report, the socalled sharing economy has already revolutionised a number of industries and is showing no signs of slowing down.

Driven by a fundamental shift from private ownership to shared usage and access, the sharing economy promises to provide potential benefits to both the economy and society through the shared consumption of goods and services. The rapidly developing segments in the sharing economy have profitably leveraged unprecedented advances in technology to match cultural trends and the evolving needs and demands of their customers.

In fact, CC business models like Uber are described as “sharing redefined by technology”. They tend to utilise two-way online platforms and smart algorithms to conduct business, and break away from the traditional notions of doing business by seamlessly linking stakeholders and decreasing transaction costs. One of their chief claims, in terms of social benefit, is that they empower individuals to become microentrepreneurs who make their assets, skills or time available publicly by means of a digital matchmaking platform. Digitally driven business models like this are allowing new entrants – sometimes from lowincome groups – to access markets and disrupt wellestablished players in numerous industries and gain a competitive advantage in the process.

This alone must make them worthy of consideration in any discussion about boosting economic growth in highly unequal emerging markets. Such business models have the potential to be rolled out into other areas of the economy. Imagine for example, if governments could leverage mining-related infrastructure for regional economic development. Facilitating the shared use of mining infrastructure between mining companies and third parties could contribute to the distribution of the benefits of mining investments more widely.

So far, so good. But not everyone is convinced. Despite the seductive promise of CC business models, there is ambivalence, and uncertainty surrounding the stakeholder impacts of such models especially those operating in emerging economies like South Africa, where almost no research has been done.

“There is no reason to assume that CC business models are sustainable business models per se. The question whether CC leads to more sustainable business is especially unclear within an emerging market context, where it might be of special importance due to the particular vulnerability of the potentially affected social groups,” comments Betine Dreyer, a researcher from the UCT Graduate School of Business (GSB), who recently co-authored a paper that set out to plug this research gap and investigate the impact of CC models on stakeholders in South Africa.

Dreyer and co-authors Professor Ralph Hamann and Kristy Faccer from the GSB and Florian Lüdeke-Freund, from the University of Hamburg, explain that critics have suggested that CC models could be exploiting people rather than empowering them because they do not sufficiently protect workers’ rights. The protection of consumers, too, often appears to be of secondary concern in the face of aggressive expansion. Uber, for example, has been slow to comply with regulations protecting passengers or to conform to established practice in its hunger for market share.

So, while the models do hold significant potential for economic empowerment, especially of marginalised groups, more attention needs to be paid to local context and understanding the impact of business model changes on local stakeholders. Simply put, the impact of a shift in Uber policy at global level could have very different impacts on drivers in the US than on drivers in South Africa.

A case in point was the introduction of cash payments in line with its global strategy earlier in 2016. While on the surface this move was good for consumers and business, in South Africa, it undermined two important stakeholder benefits: the perceived security for drivers and customers associated with cashless transactions in a high-crime environment; and the market differentiation between Uber South Africa and the traditional taxi industry.

CC business models, are, by their very nature, agile. Changes can be implemented relatively easily and swiftly, given the technological platform at the core of the business model. But this brings threats as well as opportunity.

The GSB research concludes that CC business managers should pay greater attention to local context when making business model changes, than they seem to be doing currently.

Not to do so runs the risk that the baby gets thrown out with the bathwater, and the country loses out on the potential benefits of disruptive power of CC business models. As Botsman and Rogers, authors of the influential book What’s mine is yours: How collaborative consumption is changing the way we live, point out – CC business models could be “as important as the industrial revolution in terms of how we think about ownership”.

Uber has been the ‘bull in a china shop’ in many ways, but their success demands that the model is given serious consideration as an enabler for economic development.

SA’s National Development Plan’s pledge, declares that, as a nation, South Africa must keep on trying to succeed. This demands, that as a country we learn from the shortcomings of business model innovations like Uber and build on their success. We need to take the best that CC models have to offer and make them work in the SA context.

The authors are MBA students at the GSB. This article is based on research they conducted as part of their course requirements with fellow students Trisha Naicker, Adam Parsons and Wouter Vink. It draws inspiration from a report on Business Models for Shared Value from the Network for Business Sustainability-South Africa.