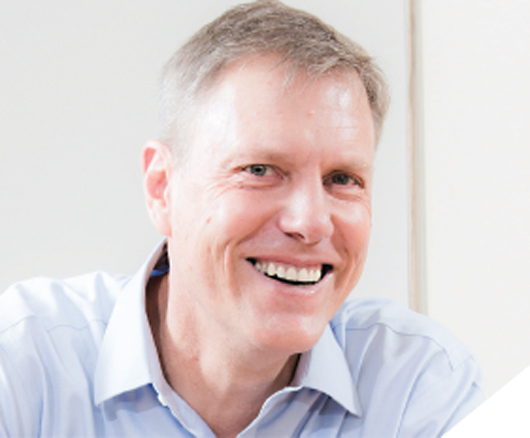 Some 25 years ago Andrew Ainslie was urged to pursue an academic career by UCT’s Graduate School of Business. He did … and in May he was named Dean of a top New York business school.

When the position of Dean of the Simon Business School at the University of Rochester opened up after a decade, the university launched an extensive nation-wide search across the campuses of the United States.

And the person they have appointed is Andrew Ainslie, a double alumnus of the University of Cape Town, who followed a BSc in Electrical Engineering and a decade-long stint in the South African corporate world with an MBA at the UCT Graduate School of Business. It was this postgraduate degree that he credits for sparking a passion for a datadriven approach to business and launching a 20-year academic career, which has culminated in the position of Dean of the Simon School.

“The Simon School has a great history. It was one of the founding schools to introduce the rigorous use of economics and statistics in business. It has an economic approach to business, which aligns exactly with my training and background,” said Ainslie.

Situated on the River Campus of Rochester, a top-tier research university in the northern reaches of New York State, the Simon School was recently rated among the top 10 in the world for finance and accounting by the Financial Times. Its MBA programme is ranked 29th in the US and 55th globally by the Financial Times.

One of Ainslie’s challenges is to bump up the school’s ranking. “Our first challenge is to re-engage the business community and to get recognition of the MBA programme’s value. We need to connect the school to the shift in business towards statistics and remind the community that the Simon School has always been about analytics.”

Ainslie will be leaving his post as associate dean on the full-time MBA programme at UCLA Anderson, a school that has increased its admissions by more than 60%, its placements by more than 20%, and re-engineered its MBA programme during a four-year tenure that Ainslie describes as “wonderful”.

It’s an acknowledgement that Ainslie made in his acceptance speech. On holiday in Mexico when he heard of his appointment, Ainslie flew via Los Angeles on the west coast to collect a suit before jetting to the east coast to accept his position, which he did with vigorous nods to Pitt and the “role he has played as mentor up until this day.”

Ainslie describes his time at the school and the faculty of the GSB as “incredible,” and makes special mention, in addition to Pitt, of the late Kate Jowell and Mike Paige (now dean of the School of Business at Endiocott College, in Beverly Massachusetts). “If it weren’t for such personal relationships during and after my time at the GSB, I wouldn’t be here. The GSB is a place where students and faculty genuinely make friends. I studied my MBA part time, as I was at Hewlett Packard at the time, and I remember the strong messaging of business being entirely about leadership, and being able to apply what I’d learned in the evening by critiquing the leadership around me in the day.”

Ainslie says he looks forward to linking with the GSB and urges students to remember its global level and the international network it taps into.