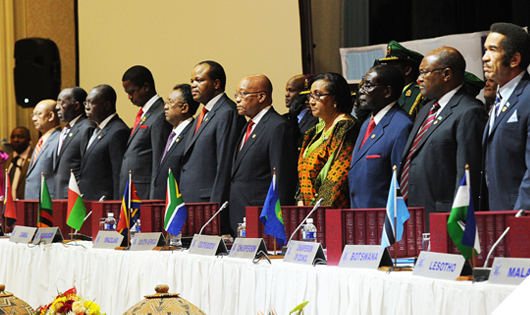 The opening ceremony of the 35th SADC Heads of State and Government Summit in Gaborone, Botswana. Image by Kopano Tlape for the Government Communication and Information System.
The advantages of stronger regional blocks to drive Africa’s development are many, but structural and policy hurdles remain that threaten to undermine any benefits.

Regional integration in Africa has, for the most part, proceeded slowly and erratically. However, recently several African governments have been pushing for renewed regional cooperation in a bid to add more impetus to the continent’s economic growth.

Thus, the recent initiative to establish a Tripartite Free Trade Area (T-FTA) between the member states of the Common Market for Eastern and Southern Africa (COMESA), the East African Community (EAC) and the Southern African Development Community (SADC), has been seen as a game changer for the continent.

The free-trade agreement, which effectively created a common market spanning half the continent, from Cairo to Cape Town, was launched in Egypt in June last year. The three blocks that make up the free trade area bring together 26 countries with a population of around 625 million people and GDP of $1,6 trillion. Tariff liberalisation, trade remedies, provision for dispute settlement, elimination of quantitative restrictions, customs cooperation and trade facilitation are some of the key aspects of the deal.

“What we are doing today represents a very important step in the history of regional integration of Africa,” Egyptian president, Abdel Fattah al-Sisi, said last year as the free trade area was launched.

President Robert Mugabe, who was chairperson of the African Union at the time, said the trade agreement would create a “borderless economy” that would rank 13th in the world in terms of GDP.But while the integration efforts have gathered pace, considerable structural and policy hurdles still remain which threaten to undermine any benefits that might flow from this. These include, inter alia, poor infrastructure, political instability and generally low levels of industrialisation.

“There is this idea that somehow regions will foster economic growth. Why? What has to happen first is that the conditions for growth have to exist – that is infrastructure to encourage economic activity. Roads, rail, ports, airports, telephone and cell phone connectivity that works well, water, electricity and security of property and person,” says UCT Graduate School of Business (GSB) professor Thomas Koelble. He adds that regardless of integration efforts, the continent will struggle to attract ongoing investment if security concerns, among other issues, are not addressed.

“The fact of the matter is that investment in Africa will lag if security of person and property are non-existent or tenuous. Economic activity will gravitate to those areas where infrastructure for certain economic activities exists and in which property and person is relatively secure.”

In addition, regional planning has to be focused on providing the essentials for economic activity and “cannot start off as another means for politicians to raid the national cookie jar,” says Koelble.

Many African countries cite a lack of funds as the reason why infrastructure developments have progressed at a very slow pace and it is possible that the new Brics (Brazil, Russia, India, China and SA) development bank, through its Africa branch in South Africa, will play a role in boosting Africa’s infrastructure drive. Pretoria believes that while China may have the largest share of voting rights in the bank with its $41 billion pledged contribution, the South African contribution and its work in the organisation will go a long way to developing the rest of the continent as an emerging economic force.

It would be good for Africa if this turns out to be the case and if better financing can pave the way for better integration. As the World Bank report points out, the advantages of integration are many. Not only does it lower the cost of infrastructure by giving smaller countries access to more efficient technologies and a larger scale of production, it also allows less developed countries to follow in the slipstream of their more successful neighbours – as happened in Asia.

The success of the Asian economies had a flying geese aspect to it, with Japan as the initial leader, then followed by the group of four including South Korea, Taiwan, Singapore and Hong Kong. These were joined by the South East Asian countries of Malaysia, Thailand and Indonesia, then China and more recently Vietnam and so forth. The regional momentum also created regional supply lines closely integrated into complex value chains.

This is going to be key in Africa’s economic future. The individual size of African economies means that developing viable local industries and sectors that help build a more inclusive African economy is going to require further and different economic integration with diverse countries assuming different roles. South Africa, for example, is not competitive in low-value manufacturing as its cost structure is too high. The manufacturing sector has been declining for decades and even the extreme depreciation of the currency has not triggered a revival.

Both industry and government are at fault. The latter with an antiquated approach to industrial policy that does not recognise how the global economy and its production networks have fundamentally altered the nature of manufacturing; the former, by not developing manufacturing chains into neighbouring countries. South African firms have moved into the rest of the continent to sell goods and services but have not fully exploited the opportunities to develop these locations as sources of lower cost production, something that could actually help the country’s internal revival of manufacturing as a source of cheap inputs that are geographically proximate.

Africa must move from being a place where others come to sell stuff and, equally problematically, an economy that sells its natural resources wholesale to others to develop and refine. African economies must invest in themselves and each other and develop infrastructure and supply chains that work to promote real growth at a local level. This requires a different mindset.

A decade of euphoric growth in Africa, fuelled by rising commodity prices, better governance, positive demographics and rising incomes, has encouraged many to ignore some of the warning signs, but the recent downturn in the commodity price cycle has exposed the soft underbelly of these economies. It is hoped that a renewed focus on regional integration based on sound principles of collaboration will encourage a healthier, more resilient long-term development trajectory for the continent.