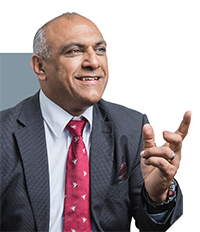 With over 30 years of business experience, the CEO of African Equity Empowerment Investments Limited (AEEI), a diversified Group listed on the Johannesburg Stock Exchange, Khalid Abdulla believes now, more than ever, that investing in people is the best strategy for success in business as it is in life.

A passionate family man, Abdulla has just been recognised as SA’s Most Empowered Business Leader of 2017 by the Oliver Empowerment Awards and in 2015 was listed in the top ten best CEOs in South Africa by the Financial Mail. Under his leadership, the Group has also received several prestigious awards in the past trading year. Implicit in all these honours, he says, is a recognition that a people-centric approach pays off.

Abdulla’s formative years had much to do with his current success. Growing up in a rough neighbourhood, he developed a keen interest and excelled in sport and was even scouted for an international soccer team in his late teens. The sporting world, he says, taught him much about the importance of being part of a capable team, and nurturing talent as a leader.

Besides his street-smart upbringing, his studies (a B. Compt (Honours) and a CTA from the University of South Africa) taught him further valuable lessons about the relationship between academic life and real-world business. Abdulla says, “I was forced to complete my degrees part time and work while I was studying, from day one. This meant I was picking up a lot of business experience during my studies, which definitely gave me an advantage over many of the full-time students.”

After completing his accounting articles and working his way up through the industry, Abdulla found himself in the position of CFO at AEEI. Shortly afterwards, to challenge himself, he enrolled in an MBA at the UCT Graduate School of Business.

“The MBA programme was easily the toughest couple of years of my life but I definitely learnt what I needed to take my career further. It was much more than just the academic component. The opportunities to network and learn how to understand people and stakeholder relationships were immensely valuable,” says Abdulla.

The year after graduating, Abdulla put this new-found expertise to work in a new role as CEO of the AEEI. He also elected to continue to pass the benefit of his experience on to others in the industry, personally mentoring one or two MBA students each year as a way of giving back.

“The best piece of advice that I can give to any MBA student, is to receive solid guidance as soon as possible. The opportunity to speak to an experienced mentor before making a big decision, helps to develop your confidence to make the right moves and implement the right strategies,” he says.

One might argue that, as a leader at the top of his game, there is not that much further that Abdulla could go from here – but he is not resting on his laurels yet. As a forward-thinking person he has positive, realistic growth plans, not only for AEEI, but for the various communities he is engaged in and the country as a whole. He adds that as the country is entering difficult times, it is going to need good and responsible leadership and organisations now more than ever.

“Strengthening the overall governance within the organisation; strengthening the business leadership from entrepreneurial to professional business processes; communicating with all internal and external stakeholders – which includes customers, employees and shareholders – are all principles that make it possible to run almost any company well,” Abdulla says.